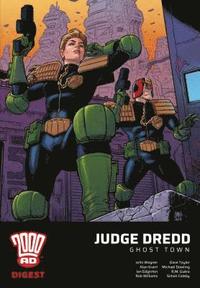 av John Wagner, Alan Grant, Rob Williams, R M Guerra, Dave Taylor
Häftad Engelska, 2019-07-25
119
Köp
Spara som favorit
Skickas inom 5-8 vardagar.
Fri frakt inom Sverige över 159 kr för privatpersoner.
A CLASSIC MODERN JUDGE DREDD STORY PRESENTED IN THE LOW-PRICED DIGEST FORMAT RESTORING ORDER! Mega-City One, 2135 AD. After the destruction wrought by the Chaos Bug with most of the city in ruins, a decimated Justice Department is struggling to cope. With disease, corruption, and looting rife, there are some that seek to take advantage of the city's condition, including dangerous psychic, Algol Rey. Judge Dredd and Psi-Judge Anderson have survived, but after all the violence and horror, can they bring order back to a damaged city? Their limits as Judges are put to the test!
Visa hela texten

One of the most influential names in the British comics industry, John Wagner started his professional career in the 1960s, working for DC Thompson in Dundee. Sub-editing various titles including Romeo, Wagner went freelance in the early seventies, forming a writing partnership with Pat Mills. Soon after, Wagner then made the move down south, joining IPC's staff, where he initially edited girls' titles, Sandie and Princess Tina, before helping to develop Battle Picture Weekly. Appointed as editor to the ailing boys' comic Valiant, Wagner had an instant impact, co-creating and writing the hard-hitting cop strip One-Eyed Jack. He is best known as the co-creator of both Judge Dredd and Strontium Dog for 2000 AD Rob Williams is the writer of Suicide Squad and Martian Manhunter for DC Comics, Unfollow for Vertigo and Doctor Who: The Eleventh Doctor for Titan Comics. His previous work for 2000 AD includes Judge Dredd: Titan, The Grievous Journey Of Ichabod Azrael (And The Dead Left In His Wake) and The Ten-Seconders and he is currently writing Roy of the Rovers for Rebellion