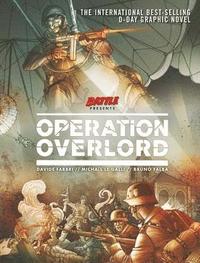 Davide Fabbri was born in Italy but found success in the American comic book industry drawing first Starship Troopers and then Star Wars for Dark Horse Comics. He co-plotted and illustrated the Brothers in Arms mini-series based on the series of computer games, and drew the two Victorian Undead mini-series written by Ian Edginton for Vertigo/DC Comics. From 2014 he has worked on the Operation Overlord series of graphic novels for Editions Glenat, with the sixth volume released in 2019.