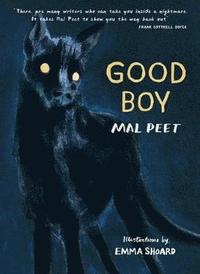 av Mal Peet
Häftad Engelska, 2019-03-05
Unga vuxna
109
Köp
Spara som favorit
Skickas inom 5-8 vardagar.
Fri frakt inom Sverige för privatpersoner.
Sandie has been battling it since childhood: the hulking, snarling black dog of her nightmares. For years, her precious pet dog Rabbie has kept the monster at bay, but when he is no longer there to protect her, the black dog reappears to stalk Sandie in her sleep ... Illuminating the undeniable power of Mal Peet's pared-back prose, Good Boy is an evocative examination of fear and anxiety that will leave you guessing long after its final page. Particularly suitable for struggling, reluctant or dyslexic readers aged 14+
Visa hela texten

Mal Peet's many honours for his work include the Branford Boase Award, the Carnegie Medal and the Guardian Children's Fiction Prize. He was best known for his young adult fiction, including Keeper, Tamar and Exposure. In 2017, his novel Beck - completed after his death by his good friend Meg Rosoff - was shortlisted for the Carnegie Medal. Mal passed away in 2015. Emma Shoard is an illustrator, printmaker and Daunt bookseller who graduated in 2011 from Kingston University's Illustration & Animation course. In 2018, Emma was longlisted for the prestigious Kate Greenaway medal for her artwork in Siobhan Dowd's The Pavee and the Buffer Girl.