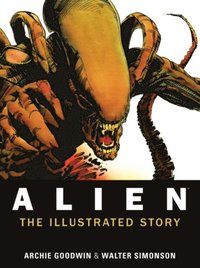 "As I read it, I kept thinking, 'This is a super-strong adaptation,' and, 'If the movie were never made, and no one had ever seen Alien, this graphic novel would probably be considered one of the best sci-fi comics ever.'" - Comic Book Resources "An incredible example of how to adapt a motion picture into a graphic novel." - TG Daily "Incredible...the illustrated story of Alien is unlike any movie adaptation I've read. It manages to capture the essence of the film, the pacing, the terror, and the lived in feel better than any film-to-comic I've ever encountered. Reading the book, I could even hear the notes from Jerry Goldsmith's score and the actual sound design." "The sequential storytelling on display, an incredible collaboration between between Goodwin and Simonson working from the shooting script (and early cuts of the film), is as elegant and well-paced as a comic can be." - Huffington Post ""entirely satisfying...should be seeked out by any fan of the franchise." - GeekNewWave

Archie Goodwin, American comic book writer, editor, and artist, best known for adapting Star Wars to comics for Marvel, and his work at Warren. Walt Simonson is one of the most highly regarded comics creators around, having written, pencilled or inked Batman, The Hulk and Superman, to name but a few!