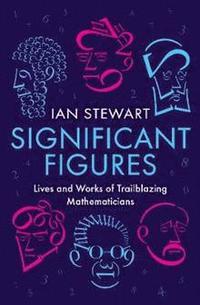 Lives and Works of Trailblazing Mathematicians

av Professor Ian Stewart
Häftad Engelska, 2018-08-02
139
Köp
Spara som favorit
Skickas inom 7-10 vardagar.
Fri frakt inom Sverige över 159 kr för privatpersoner.
Finns även som
Visa alla 1 format & utgåvor
Which mathematician elaborated a crucial concept the night before he died in a duel? Who funded his maths and medical career through gambling and chess? Who learned maths from her wallpaper? Ian Stewart presents the extraordinary lives and amazing discoveries of twenty-five of history's greatest mathematicians from Archimedes and Liu Hui to Benoit Mandelbrot and William Thurston. His subjects are the inspiring individuals from all over the world who have made crucial contributions to mathematics. They include the rediscovered geniuses Srinivasa Ramanujan and Emmy Noether, alongside the towering figures of Muhammad al-Khwarizmi (inventor of the algorithm), Pierre de Fermat, Isaac Newton, Carl Friedrich Gauss, Nikolai Ivanovich Lobachevsky, Bernhard Reimann (precursor to Einstein), Henri Poincare, Ada Lovelace (arguably the first computer programmer), Kurt Goedel and Alan Turing. Ian Stewart's vivid accounts are fascinating in themselves and, taken together, cohere into a riveting history of key steps in the development of mathematics.
Visa hela texten

Stewart is Britain's most brilliant and prolific populariser of maths. -- Alex Bellos This is not pure maths. It is maths contaminated with wit, wisdom, and wonder. Ian really is unsurpassed as raconteur of the world of numbers. He guides us on a mind-boggling journey from the ultra trivial to the profound. Thoroughly entertaining. * New Scientist * In his latest book, master mathematics expositor Ian Stewart delivers on his catchy title with succinct summaries of twenty-five of the most influential mathematicians of all time, from Archimedes, ca 250BCE, to modern day giant William Thurston, who died in 2012. By providing short descriptions of their most significant works, Stewart provides a concise overview of what has been hot in math at different times in the discipline's history. A great way for an outsider to get a sense of the huge historical arc of mathematical discoveries that has led to the mathematics-and the world-of today. I recommend it. -- Keith Devlin, Stanford University, author of The Man of Numbers: Fibonacci's Arithmetic Revolution and Finding Fibonacci: The Quest to Rediscover the Forgotten Mathematical Genius Who Changed the World Praise for previous books: 'With captivating stories and his signature clarity, Ian Stewart shows us how math makes the world - and the rest of the universe - go round -- Steven Strogatz, Professor of Mathematics, Cornell University, and author of The Joy of X Professor Ian Stewart shows us emphatically that great mathematicians have often also been public servants, political activists and expositors, not just lone geniuses or one-track minds. Mathematics for all its abstraction is a communal and human activity, and this is vividly captured in this fascinating whistlestop tour of the human lives behind the greatest mathematics in history. -- Dr. Eugenia Cheng, Scientist In Residence, School of the Art Institute of Chicago, author of 'How to Bake Pi' and 'Beyond Infinity' This beautifully written assemblage of the lives and work of the world's greatest mathematicians is both humbling and inspiring. Stewart shows with his typical clarity how the power of pure thought has shaped our world for over two millennia. -- J.S. Al-Khalili, OBE, Professor of Physics, University of Surrey The search for mathematical truth, no matter how abstract, is ultimately carried out by flesh-and-blood people. In this readable book, Ian Stewart makes math accessible by humanizing its greatest practitioners, simultaneously illuminating who they were and the discoveries they made. You cannot read it without being struck by admiration for the driven souls who created mathematics over the centuries. -- Sean Carroll, author of 'The Big Picture: On the Origins of Life, Meaning, and the Universe Itself' In Significant Figures, Ian Stewart brings mathematics to life with intriguing accounts of twenty-five extraordinary contributors to the field. His biographical sketches blend equal parts passion-love affairs and rivalries-with insights-groundbreaking discoveries-to offer vivid, complete portraits of his subjects. By showing how even mathematical geniuses face all-too-human challenges, Stewart offers a riveting chronicle of one of humankind's loftiest endeavors. -- Paul Halpern, author of 'The Quantum Labyrinth: How Richard Feynman and John Wheeler Revolutionized Time and Reality'

Ian Stewart is Mathematics Professor Emeritus at the University of Warwick. His recent books include Incredible Numbers, Seventeen Equations that Changed the World, Professor Stewart's Casebook of Mathematical Mysteries and Calculating the Cosmos (all published by Profile). He is a Fellow of the Royal Society.