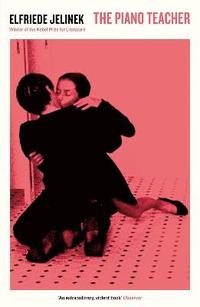 av Elfriede Jelinek
Häftad Engelska, 2016-11-03
109
Köp
Spara som favorit
Skickas inom 5-8 vardagar.
Gratis frakt inom Sverige över 159 kr för privatpersoner.
Finns även som
Visa alla 3 format & utgåvor
One of Elena Ferrante's Top 40 Best Books by Women Erika Kohut teaches piano at the Vienna Conservatory by day. By night she trawls the city's porn shows while her mother, whom she loves and hates in equal measure, waits up for her. Into this emotional pressure-cooker bounds music student and ladies' man Walter Klemmer. With Walter as her student, Erika spirals out of control, consumed by the ecstasy of self-destruction. A haunting tale of morbid voyeurism and masochism, The Piano Teacher, first published in 1983, is Elfreide Jelinek's Masterpiece. Jelinek was awarded the Nobel Prize For Literature in 2004 for her 'musical flow of voices and counter-voices in novels and plays that, with extraordinary linguistic zeal, reveal the absurdity of society's cliches and their subjugating power. The Piano Teacher was adapted into an internationally successful film by Michael Haneke, which won three major prizes at Cannes, including the Grand Prize and Best Actress for Isabelle Huppert.
Visa hela texten

In this demented love story the hunter is the hunted, pain is pleasure, and spite and self-contempt seep from every pore. * Guardian * As a portrait of repressed female sexuality and a damaged psyche, The Piano Teacher glitters dangerously * Observer * Some may find Ms Jelinek's ruthlessly unsentimental approach - not to mention her image of Vienna as a bleak city of porno shops, poor immigrants and loveless copulations - too much to take. Her picture of a passive woman who can gain control over her life only by becoming a victim is truly frightening. Less squeamish readers will extract a feminist message: in a society such as this, how else can a woman like Erika behave? * New York Times Book Review * Heavily symbolic and bleakly realistic, The Piano Teacher turns its female heroine, Erika Kobut, into an extended metaphor for a doomed society... Passionately political under its dense mantle of sexual imagery, the novel shares the dark world view long common to Eastern European literature and now increasingly evident in books from ostensibly more fortunate countries, insistently calling our attention to the discrepancy between the Vienna of our fantasies and the one in which Jelinek lives * Los Angeles Times * A brilliant, deadly book -- Elizabeth Young A dazzling performance that will make the blood run cold -- Walter Abish The Piano Teacher is an astounding book * Sunday Herald * There are some horrifically crazed laughs to be had at the antics of mother and daughter trapped in their domestic hell * Irish Times * Jelinek's expressionistic language indulges with lethal intensity * Metro * Jelinek's fragmented style blurs reality and imagination, creating a harsh, expressionistic picture of sexuality * Scotland on Sunday * A brilliant, bitter, wonderful portrait of mother and daughter, artist and lover * John Hawkes * A startling novel... eloquent, intelligent and deeply unsettling; the polar opposite of pornography. -- Arifa Akbar * Independent * Terrifyingly powerful -- Hermione Hoby * Observer *

Elfriede Jelinek was born in Austria in 1946 and grew up in Vienna where she attended the famous Music Conservatory. The leading Austrian writer of her generation, she has been awarded the Heinrich Boell Prize for her contribution to German literature. The film of The Piano Teacher by Michael Haneke won the three main prizes at Cannes in 2001. In 2004, Elfriede Jelinek was awarded the Nobel Prize for Literature.