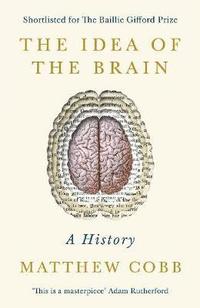 The Idea of the Brain

A History: SHORTLISTED FOR THE BAILLIE GIFFORD PRIZE 2020

av Professor Matthew Cobb
Inbunden Engelska, 2020-03-12
259
Köp
Spara som favorit
Skickas inom 3-6 vardagar.
Gratis frakt inom Sverige över 159 kr för privatpersoner.
Finns även som
Visa alla 2 format & utgåvor
Sunday Times Book of the Year Telegraph Science Book of the Year Shortlisted for the 2020 Baillie Gifford Prize This is the story of our quest to understand the most mysterious object in the universe: the human brain. Today we tend to picture it as a computer. Earlier scientists thought about it in their own technological terms: as a telephone switchboard, or a clock, or all manner of fantastic mechanical or hydraulic devices. Could the right metaphor unlock the its deepest secrets once and for all? Galloping through centuries of wild speculation and ingenious, sometimes macabre anatomical investigations, scientist and historian Matthew Cobb reveals how we came to our present state of knowledge. Our latest theories allow us to create artificial memories in the brain of a mouse, and to build AI programmes capable of extraordinary cognitive feats. A complete understanding seems within our grasp. But to make that final breakthrough, we may need a radical new approach. At every step of our quest, Cobb shows that it was new ideas that brought illumination. Where, he asks, might the next one come from? What will it be?
Visa hela texten

An intellectual tour de force, and a brilliant demonstration of how a historical approach is often the best way of explaining difficult scientific problems ... Cobb combines scholarship with clarity to a remarkable degree ... For anybody who wants to understand the depths of our understanding of our brains, and our even deeper ignorance, I cannot recommend this book strongly enough. -- Henry Marsh * New Statesman * Sweeping and electrifyingly sceptical -- James McConnachie * Sunday Times * A truly terrific work and a wonderful read. The best book produced in my lifetime on the brain. -- Richard C Atkinson, President Emeritus, University of California Cobb is a rare jewel. [The Idea of the Brain] is a typically erudite, thrilling and thorough exploration of the most complex thing in the known universe. -- Adam Rutherford * the Week * Rich and fascinating -- Steven Poole * Guardian * An engrossing journey through the centuries ... Cobb explores memory, circuits, computers, chemistry, localization of function and consciousness. In clear and lively prose, he introduces us to the characters, personalities, and debates of each era ... The reader will come away from this illuminating history of thinking about the brain with a renewed appreciation of the task that remains ... in the final section Mr. Cobb offers glimmers of the dazzling possibilities. -- Carol Tavris * Wall Street Journal * Ambitious intellectual history ... It is a very good book -- Stephen Casper * Nature * Enthralling -- Shane O'Mara * Times Higher Education * Fascinating ... instructive -- Simon Ings * New Scientist * Cobb's erudition and engaging writing style take us on an enthralling journey -- Alex Gomez-Marin * Science * A riveting account of brain research, our current knowledge, and problems yet to be solved * Kirkus Reviews * If you know nothing about neuroscience and need to get up to speed fast ... try this brilliant offering, in which zoologist and science historian Cobb dives into the fundamentals - and the frontiers - of our understanding of the brain. -- Gary Stix * Scientific American * Captivating ... Cobb provides a refreshingly candid, accessible and insightful tour of the ups, downs, dead ends and future prospects of our endeavour to understand the most complex and fascinating entity in the known universe - the brain. -- Dr John R. Kelly * Irish Journal of Psychological Medicine * The story of the most complex object in the universe has never been told with greater clarity, insight and wit. Charting the route to future discoveries, this is a masterpiece. -- Adam Rutherford * author of The Book of Humans: A Brief History of Culture, Sex, War and the Evolution of Us * Humanity's quest to understand the brain has led us to some of our most important ideas, but as the eminent science writer Matthew Cobb shows in his riveting, eye-opening book, that isn't all it gave us. In fact, the road to our hi-tech present was strewn with brutes, eccentrics - and victims. Highly entertaining and deeply authoritative, this is the rare science book that knows both the value of knowledge and its price. Read it. -- Paul Mason * author of Clear Bright Future: A Radical Defence of the Human Being * Thoughtful and thought-provoking, this is a book I wish I could have written, and one that I will be thinking about for a long time. It is a down payment for future brain research. -- Marina Picciotto * editor-in-chief of the Journal of Neuroscience * Not only is this a work of phenomenal erudition, but it has the rare distinction among books on the brain of promoting no premature "explanation" of how this astonishingly complicated organ does its job. Instead, Cobb offers an honest appraisal both of what we know and what is still a mystery. There is no better primer to one of the most profound questions facing science today: how matter creates thought and consciousness. -- Philip Ball * author of How to Grow a Human: Adventures in Who We Are and How We Are Made *

Matthew Cobb is Professor of Zoology at the University of Manchester. His previous books include Life's Greatest Secret: The Race to Discover the Genetic Code, which was shortlisted for the Royal Society Winton Book Prize, and the acclaimed histories The Resistance and Eleven Days in August. He is also the award-winning translator of books on the history of molecular biology, on Darwin's ideas and on the nature of life.