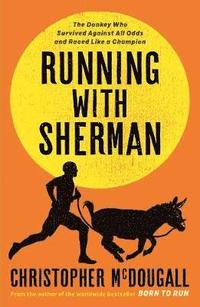 av Christopher McDougall
Inbunden Engelska, 2019-10-03
229
Köp
Spara som favorit
Skickas inom 5-8 vardagar.
Fri frakt inom Sverige för privatpersoner.
Finns även som
Visa alla 2 format & utgåvor
From the author of the international bestseller Born To Run When barefoot running guru Christopher McDougall takes in a neglected donkey, his aim is to get Sherman back to reasonable health. But Sherman is ill-tempered, obstinate and uncooperative - and it's clear his poor treatment has made him deeply fearful of humans. Chris knows that donkeys need a purpose - they are working, pack animals - and so when he learns of the sport of Burro Racing or running with donkeys, he sets out to give Sherman something worth living for. With the aid of Chris's menagerie on his farm in rural Pennsylvania, his wife Mika and their friends and neighbours including the local Amish population, Sherman begins to build trust in Chris. To give him a purpose, they start to run together. But what Sherman gains in confidence and meaning is something we all need: a connection with nature, the outdoors, with movement. And as Chris learns, the side benefits of exercise and animal contact are surprising, helping with mental and physical health in unexpected ways.
Visa hela texten

From the first page to the last, Running with Sherman is a delight, full of heart and hijinks and humour. I quickly fell in love with Sherman and the colorful cast of two- and four-legged characters that surrounded him. Christopher McDougall is a gifted storyteller who gets to the heart of the human-animal connection. -- John Grogan, author of Marley & Me: Life and Love with the World's Worst Dog Praise for Born to Run: Part how-to manual, part scientific treatise but throughout a ripping yarn, this book will inspire everyone who reads it to think on their feet. * Independent * A fascinating and true adventure story, destined to become a classic -- Ranulph Fiennes Not just a book for runners, but for anyone who has dreamed of venturing beyond their comfort zone -- Tim Butcher A really phenomenal book -- Jon Stewart Praise for Natural Born Heroes: 'A fascinating edifice of ideas ... But the pleasures of the book are as much to do with the fascinating panoply of characters, war heroes all, British, Commonwealth and Cretan, whose exploits contributed so much to Hitler's downfall. * Independent * An undeniably ripping yarn. One for sofa surfers and adventurers alike. * Independent on Sunday * A marvellously eclectic book ... the perfect tonic for the paunchy, jaded He-Man in your life and comatose inner heroes everywhere * the Times *

Christopher McDougall is a former war correspondent for the Associated Press and author of the international bestseller Born to Run, which is currently being adapted into a film, and Natural Born Heroes. He runs with Sherman among the Amish farms around his home in rural Pennsylvania.