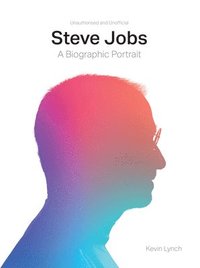 av Kevin Lynch
Inbunden Engelska, 2018-11-08
219
Köp
Spara som favorit
This is a stunning visual guide to the life and works of entrepreneur Steve Jobs. Easily one of the most influential innovators of the twenty-first century, Steve Jobs has fundamentally shaped the way in which we communicate and, even more broadly, live our lives. In this information-packed graphic biography, Steve Jobs' remarkable talent and genius are explored through bold design and original graphics. Kevin Lynch explores Jobs' journey from savvy salesman, to his rivalry and market competition with Bill Gates, and his shift towards radical innovations in later life. This technological innovator led a fascinating, astounding and ultimately too short life, that irreversibly impacted how we communicate. Steve Jobs is a visual celebration and comprehensive study of 'The Maverick' and his work; and a must-have for any fan of Apple products.
Visa hela texten

Kevin Lynch is a London-born, Dublin-based writer and journalist. He started out as a music writer in the late 1990s, before moving to the Daily Mirror to become the newspaper's technology editor, during which time he wrote a weekly column that saw him chart the boom of consumer tech and gaming as well as the resurrection and rise of Apple Inc. Following that role, he served as editor of GuinnessWorldRecords.com and has also been a member of the judging panel for BAFTA British Academy Video Game Awards. Kevin is married with two children.

Contents includes: Jobs' early life, his discovery of electronics and the emerging Silicon Valley His work at Atari and how this paved the way to Apple Inc. His collaboration with like-minded innovators, Steve Wozniak and Mike Markkula The history of Apple computer models and specs His resignation from Apple, and infamous competition with Steve Gates and Microsoft The beginning of a musical revolution with the invention of the iPod and iTunes His final big hit with the invention of the iPad before his resignation due to ill health The world's reaction to the loss of a technology genius