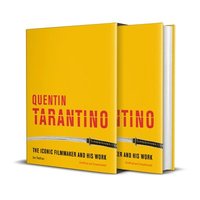 The iconic filmmaker and his work

av Ian Nathan
Inbunden Engelska, 2019-10-01
249
Köp
Spara som favorit
Get an intimate look at the cult filmmaker of our generation. Packaged in a handsome slipcase and loaded with stunning pictures from the Kobal archives, this biography explores the genesis of Tarantino's unique directorial style and provides insight into his inspirations and his frequent collaborations with favoured actors. An 8-page foldout timeline presents Tarantino's entire filmography in the heart of the book. Through in-depth and informative text written by renowned film journalist Ian Nathan, this book examines the entirety of Tarantino's work, including his early writing on screenplays such as True Romance and Natural Born Killers, his break-out directorial debut Reservoir Dogs and the career-defining Pulp Fiction, as well as his later iconic films, such as Kill Bill Volumes 1 and 2, Inglourious Basterds and Django Unchained. You'll also go behind the scenes of Tarantino's latest epic, Once Upon a Time in Hollywood. As you make your way through Tarantino's incredible career, discover what inspired him, his working methods and the breadth of his talent. With a visually arresting design that mimics Tarantino's approach to film-making and chapters organized by film, the pages are brimming with images taken on set and behind the scenes. This is the ultimate celebration for any Tarantino fan.
Visa hela texten

'Quentin Tarantino: The Iconic Filmmaker and His Work is a gloriously presented book bursting at the seams with enough information and detail to make even the mercurial Tarantino himself dizzy. For fans of Quentin Tarantino - or simply of those who are fans of cinema, period - this is must-read that you'll struggle to put down' * Starburst * "...the book does a fine job of summarizing Tarantino's personal and cinematic history." * PR0HBTD * 'A highly recommended book that will give you an intimate look at the cult filmmaker of our generation.' * Gothamology * 'Absolutely stock full of images, this page-turner also takes a look behind the scenes at Tarantino's work and what films influenced each of his many releases. This is a true entry for fans of film and should not be missed.' * 28dayslateranalysis.com *

Ian Nathan, who lives and works in London, is one of the UK's best-known film writers. He is the author of nine previous books, including Alien Vault, the best-selling history of Ridley Scott's masterpiece, Terminator Vault, Tarantino, Tim Burton, The Coen Brothers and Anything You Can Imagine: Peter Jackson and the Making of Middle-earth. He is the former editor and executive editor of Empire, the world's biggest movie magazine, where he remains a contributing editor. He also regularly contributes to The Times, The Independent, The Mail on Sunday, Cahiers Du Cinema and the Discovering Film documentary series on Sky Arts.

Introduction 6 'I didn't go to film school, I went to films.' 10 Video Archives 'I made this movie for myself, and everyone's invited.' 28 Reservoir Dogs 'I think of them as like old girlfriends...' 44 True Romance, Natural Born Killers and From Dusk Till Dawn 'My characters never stop telling stories...' 64 Pulp Fiction 'It just kind of snuck up on me.' 82 Four Rooms and Jackie Brown 'I don't really consider myself an American filmmaker...' 98 Kill Bill: Volumes 1 and 2 'Slasher movies are legitimate...' 114 Grindhouse 'Just fucking kill him.' 128 Inglourious Basterds 'Life is cheap. Life is dirt. Life is a buffalo nickel.' 142 Django Unchained 'I really was creating a little Agatha Christie thing.' 156 The Hateful Eight and Once Upon a Time in Hollywood Sources 172