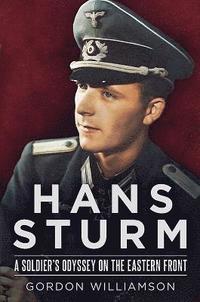 A Soldier's Odyssey on the Eastern Front

av Gordon Williamson
Inbunden Engelska, 2015-03-14
269
Köp
Spara som favorit
Skickas inom 5-8 vardagar.
Fri frakt inom Sverige för privatpersoner.
There are many biographies of former soldiers of the German Wehrmacht, many of whom had fascinating stories to tell, and several of whom were highly decorated. Few, however, can match Hans Sturm in his astonishing rise from a mere private in an infantry regiment, thrown into the bloody maelstrom of the Eastern Front, to becoming a glorified war hero whose role brought him into direct regular contact with Prominenten of the Third Reich. This young man's fearless heroism in combat earned him some of Germany's highest military awards, and yet he was pugnaciously outspoken about bullying and injustice. From striking a member of the feared Sicherheitsdienst in defence of a Jewish woman to refusing to wear a decoration he felt was tainted by its encouragement of inhumane treatment of enemy partisans, Sturm repeatedly stuck to his moral values no matter what the risk. But even when the war was finally over, his travails did not end: he was held in a number of Soviet labour camps, before finally being released in 1953. Hans Sturm: A Soldier's Odyssey on the Eastern Front is an engaging reconstruction of events based on exchanges of correspondence and reminiscences between the author and Hans Sturm himself. It vividly portrays not only a German soldier's experience on the Eastern Front, but the intriguing trajectories that success in the battlefield yielded for him at home under the Nazi regime.
Visa hela texten

GORDON WILLIAMSON is the author of over fifty successful works which deal with various aspects of militaria and military history, and have been translated into several languages. A former member of the Royal Military Police (TA), he has spent several decades studying and collecting photographs, documents, and ephemera, especially relating to World War Two, and has made personal contact with and interviewed many surviving veterans from both sides, including some of Germany's most highly decorated soldiers.