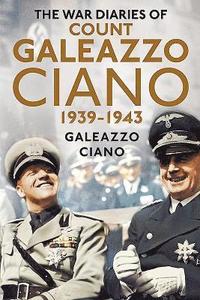 av Galeazzo Ciano
Inbunden Engelska, 2015-04-14
249
Köp
Spara som favorit
Skickas inom 7-10 vardagar.
Fri frakt inom Sverige för privatpersoner.
"In this state of mind, which excludes any falsehood, I declare that not a single word of what I have written in my diaries is false or exaggerated or dictated by selfish resentment. It is all just what I have seen and heard. And if, when making ready to take leave of life, I consider allowing the publication of my hurried notes, it is not because I expect posthumous revaluation or vindication, but because I believe that honest testimonial of the truth in this sad world may still be useful in bringing relief to the innocent and striking at those who are responsible."Count Galeazzo Ciano was foreign minister in Fascist Italy from 1936 until 1943. He was also Mussolini's son-in-law. This fascinating diary gives a day to day account of this passage through the war, his meetings with the Duce and other key figures of the conflict including Hitler and Von Ribbentrop. It becomes, in effect, a history of Italy under Mussolini. But the story does not end happily. Ciano was dismissed as Foreign Minister in 1943 after his involvement in a plot to depose Mussolini, as the Italian war effort began to crumble in the wake of allied invasion from the South.Under pressure from the Nazi's he was executed by firing squad in Verona in January 1944. Nonetheless, his diaries provide an unique and perceptive insight into this remarkable period of history, from a man that did not embrace war as many of his colleagues did.
Visa hela texten