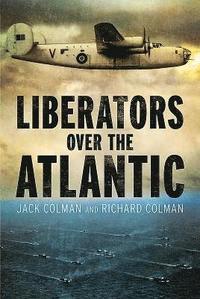 Liberators Over the Atlantic

av Jack Colman, Dr Richard Colman
Inbunden Engelska, 2017-11-23
269
Köp
Spara som favorit
Skickas inom 7-10 vardagar.
Fri frakt inom Sverige för privatpersoner.
An informative and personal account of a young man's flying experiences during WW2. Growing up in York, shaped by the threat of war-Jack Colman achieves his long held desire to become a pilot, joining the RAF in October 1940 just after his 21st birthday. He is sent to Canada to learn to fly and becomes intrigued by the technical and practical aspects of flying and navigation. Becoming a Pilot/Navigator, he joins Costal Command on Liberators based in Iceland. The practical difficulties of flying over the North Atlantic and Arctic Oceans protecting the convoys and hunting U-boats are relived as he battles with atrocious weather and navigational uncertainties. His brushes with death whether due to mechanical failure, hitting the sea, U-boat gun fire or running out of fuel, in an ever changing hostile environment are described realistically and calmly (often with humour), situations helped by a confidence in the good advice given by others, his knowledge, skills and a trust in his crew. When training he hears about the death of his father, on leave he finds time to fall in love and marry.
Visa hela texten

Bloggat om Liberators Over the Atlantic

Born in 1919 Jack Colman was the only child of Freda and Harold of York. A conscientious student he had an ambition from the age of 10 to become a Pilot. The war was his opportunity. Selected for pilot training, he joined the RAF shortly after his twenty-first birthday which rescued him, for a time, from the office job in insurance which it was recommended he took, aged sixteen. Postwar he had a spell as a commercial pilot for BEA until 1953 when layoffs saw him return to insurance. He and Peggy had two boys Peter and Richard.

Introduction; 1 I Join the `Shortsnorkers'; 2 Prelude to War; 3 Accepted at Last; 4 A Slight Hiccup; 5 Off to Canada; 6 Canadian Hospitality; 7 Airborne at Last; 8 Wings Parade at Brantford; 9 Across the Frozen Water; 10 Christmas Wonderland; 11 Slush, Mud and Prangs [Time with Ferry Command]; 12 York after the `Baedeker' Raid; 13 A Testing Time; 14 Trans-Atlantic Captain/Navigator; 15 O.P.'s Little Black Book [Time with Costal Command: 120 Squadron]; 16 The Battle of the Atlantic; 17 The Liberator Squadron; 18 A Quiet Wedding; 19 To Reykjavik; 20 `Lows' over Iceland; 21 Atrocious Weather; 22 Introduction to the Arctic; 23 Ginger Finds us a U-boat; 24 The Critical Stage; 25 The Big Battle of the Atlantic; 26 Diverted to Gander; 27 The New Wingco; 28 Icelandic Safari; 29 Quiet Time; 30 Wolf Packs Return; 31 The Hunting Horn is Silent; 32 Away from it all with Peggy; Epilogue; Table of Significant Events.