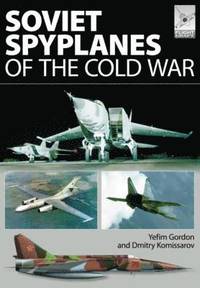 av Gordon Yefim
Häftad Engelska, 2014-03-01
199
Köp
Spara som favorit
'Spy in the Sky' matters have long been a source of interest and fascination for aircraft enthusiasts, historians and modellers and none more so than the elusive and secretive Soviet types of the Cold War era. Yefim Gordon presents us here with a range of such types, presenting a collection of photographs, profiles and line drawings together with supplementary text detailing the history of each craft, encompassing the various developmental milestones, successes and pitfalls experienced along the way. The Soviet Union's two dedicated spyplane types, the Yakovlev Yak-25RV 'Mandrake' (the Soviet equivalent of the Lockheed U-2) and the MiG-25R 'Foxbat' are profiled, supplemented by details garnered from a host of original sources. Well-illustrated histories and structural analyses are set alongside detailed descriptions of the various plastic scale model kits that have been released, along with commentary concerning their accuracy and available modifications and decals. With an unparalleled level of visual information - paint schemes, models, line drawings and photographs - it is simply the best reference for any model-maker setting out to build a variant of this iconic craft.
Visa hela texten

"If you're wanting to have a good look at the MiG-25 recce birds, this is definitely a title to add to the collection....Definitely recommended!"--Cybermodeler "This large book gave me for the first time insight information about the Soviet's involvement in and around Israel during the period of just after the 6-day war (initiative Israel) and the Yom Kippur war (initiative Egypt and Syria). Surprisingly detailed the operational dedication of the MIG-25R (reconnaissance) under real war circumstances is explained, even till the extent of names of a lot of Russian aviators! Israel was literally doing everything within her power to prevent their territory being flown over; but the Russians succeeded. If there was ever to be made a film about this, then James Bond can take the road!...The content is especially meant for a second, very specific audience, namely model builders! Of both stated Russian planes, model building drawings and a lot of design- and painting details are included. Also, in the text they go extensively into all those details. In combination with all the pictures this is for model builders just delicious!"--Aviation Book Reviews

Yefim Gordon was born in 1950 in Vilnius, Lithuania. He has been researching Soviet and Russian aviation history for more than 40 years and has one of the world's largest photograph and document archives on the subject. A professional aviation journalist and photographer since 1989, Yefim Gordon has published hundreds of features and photographs in Soviet, Russian and foreign aviation magazines. He has also authored and co-authored well over 100 books on Soviet and Russian aviation which are published in seven countries. He is a co-owner of the Moscow-based aviation publishing house Polygon Press Ltd. Translated by Dmitriy Komissarov