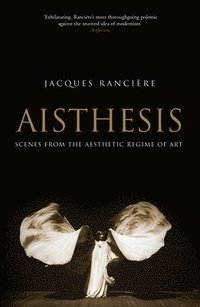 Scenes from the Aesthetic Regime of Art

av Jacques Ranciere
Häftad Engelska, 2019-07-23
136
Köp
Spara som favorit
Skickas inom 7-10 vardagar.
Fri frakt inom Sverige över 159 kr för privatpersoner.
Finns även som
Visa alla 1 format & utgåvor
Composed in a series of scenes, Aisthesis - Ranciere's definitive statement on the aesthetic - takes its reader from Dresden in 1764 to New York in 1941. Along the way, we view the Belvedere Torso with Winckelmann, accompany Hegel to the museum and Mallarme to the Folies-Bergere, attend a lecture by Emerson, visit exhibitions in Paris and New York, factories in Berlin, and film sets in Moscow and Hollywood. Ranciere uses these sites and events - some famous, others forgotten - to ask what becomes art and what comes of it. He shows how a regime of artistic perception and interpretation was constituted and transformed by erasing the specificities of the different arts, as well as the borders that separated them from ordinary experience. This incisive study provides a history of artistic modernity far removed from the conventional postures of modernism.
Visa hela texten

Jacques Ranciere is Emeritus Professor of Philosophy at the University of Paris-VIII. His books include The Politics of Aesthetics, On the Shores of Politics, Short Voyages to the Land of the People, The Nights of Labor, Staging the People, and The Emancipated Spectator. Zakir Paul is a doctoral candidate in comparative literature at Princeton University. He most recently translated a collection of Blanchot's political writings.