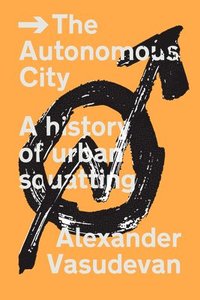 A History of Urban Squatting

av Alexander Vasudevan
Häftad Engelska, 2017-04-04
239
Köp
Spara som favorit
Finns även som
Visa alla 2 format & utgåvor
The Autonomous City is the first popular history of squatting in Europe and North America. Drawing on extensive archival research, it retraces the struggle for housing in cities such as Amsterdam, Berlin, Copenhagen, Detroit, Hamburg, London, Madrid, Milan, New York, and Vancouver. It looks at the organization of alternative forms of housing-from Copenhagen's Christiana 'Free Town' to the Lower East Side of Manhattan-as well as the official response, including the recent criminalization of squatting, the brutal eviction of squatters and their widespread vilification. As a result, Alexander Vasudevan argues how, through a shared history of political action, community organization and collective living, squatting has became a way to reimagine and reclaim the city. It documents the actions adopted by squatters as an alternative to housing precarity, rampant property speculation and the negative effects of urban redevelopment and regeneration. In so doing, the book challenges the dominant cartography of the 'neo-liberal city' and concludes that we must, more than ever, reanimate and remake the city as a site of radical social transformation.
Visa hela texten

"An encyclopaediac and vital history of a topic which is often overlooked but is invariably at the heart of radical city politics." - Anna Minton, author of Ground Control "The Autonomous City is a detailed and sympathetic history of squatting movements in Europe and the United States. In addition, it is a discussion of its meaning in the ever fluctuating meanings of urban living. Part academic treatise and part action-packed history, Vasudevan's text provides the reader with a nuanced look at the nature and meaning of the housing crisis in the capitalist West and the solutions housing occupations can provide. In doing so, he brings in the political, cultural and historical meanings behind the squatters and the communities they occupy and create. This is an essential book for anyone interested in the meaning of housing in modern society. It is also a sort of a guidebook for those tired of waiting for the economic and political systems of their respective nations to resolve the crisis that exists in almost every urban zone and who are willing to take matters into their own collective hands." - Ron Jacobs, Counterpunch "Sweeping research on the surprisingly radical history of occupying abandoned buildings and living in them." - Lauren Oyler, The New Republic "Delving into the history of squatting and radical housing activism, Vasudevan's book traces the ways housing insecurity and affordability crises intertwine with movements to claim and reclaim homes and apartments." - Patrick Sisson, Curbed "A significant contribution to the written history of squatting movements and struggles to transform the city. It is wide-ranging and well-researched, which should appeal to a wide readership including architects, urban planners, scholars of social movements and anyone with a casual interest in squatting and urban politics." - RIBA journal "Carefully researched and discursive study." - Will Self, New Statesman "Poses difficult and timely questions... a scrupulously detailed, thought-provoking study... a resource for all urban dwellers." - LA Review of Books "This admirable, jargon-free book provides rich, interesting stories about urban squatter movements and makes a significant contribution to political and urban studies and to the field of public policy." - CHOICE

Alexander Vasudevan is Associate Professor of Cultural and Historical Geography at the University of Nottingham. He is the author of Metropolitan Preoccupations: The Spatial Politics of Squatting in Berlin. His work has been published in several prestigious journals, include Antipode, Cultural Geographies, Environment and Planning A and D, Progress in Human Geography and Social and Cultural Geography. He has also written for the Guardian, openDemoracy and New Left Project.