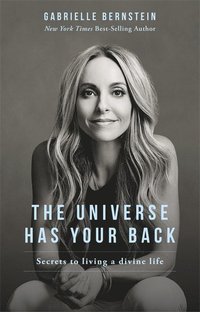 The Universe Has Your Back

How to Feel Safe and Trust Your Life No Matter What

av Gabrielle Bernstein
(7 röster)  |  Läs 1 recension
Häftad Engelska, 2016-09-27
151
Köp
Spara som favorit
Skickas inom 7-10 vardagar.
Fri frakt inom Sverige över 159 kr för privatpersoner.
Kan levereras innan jul!
'My commitment with this book is to wake up as many people as possible to their connection to faith and joy. In that connection, we can be guided to our true purpose: to be love and spread love. These words can no longer be cute buzz phrases that we merely post on social media. Rather, these words must be our mission. The happiness, safety and security we long for lies in our commitment to love.' Through acceptance, surrender and a commitment to her continually evolving spiritual path, New York Times bestselling author and international speaker Gabrielle Bernstein has been transforming her fear into faith. Her stories and universal lessons provide a framework for releasing the blocks to what everyone most longs for: happiness, security and clear direction. These lessons can help us relinquish the need to control in order to relax into a sense of certainty and freedom - to stop chasing life and truly live. Ride the swell of your energy and true power to find strength when you are down, synchronicity and support when you are lost, safety in the face of uncertainty, and joy in what might otherwise be pain. Bernstein has secrets to reveal, and she is determined to unleash the presence of your power with the comforting knowledge that the Universe has your back.
Visa hela texten

Gabrielle Bernstein is the #1 New York Times best-selling author of The Universe Has Your Back and has written five additional best sellers. She was featured on Oprah's Super Soul Sunday as a "next-generation thought leader" and The Oprah Winfrey Network chose Gabrielle to be part of the "Super Soul 100" - a dynamic group of 100 trailblazers whose vision and life's work are bringing a higher level of consciousness to the world. The New York Times identified Gabrielle as "a new role model", YouTube named her one of 16 YouTube Next Video Bloggers, she was named one of Mashable's 11 Must-Follow Twitter Accounts for Inspiration, and she's featured on the Forbes List of 20 Best-Branded Women. Gabrielle appears regularly as an expert on The Dr. Oz Show and co-hosted the Guinness World Record largest guided meditation with Deepak Chopra. www.gabbybernstein.com