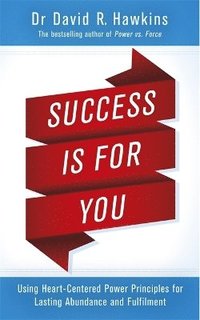 Success Is for You

av David R Hawkins
Häftad Engelska, 2016-04-19
224
Köp
Spara som favorit
Finns även som
Visa alla 2 format & utgåvor
Dr David R. Hawkins was renowned as a physician, lecturer and researcher of consciousness. But he's perhaps most revered for his books, particularly the seminal Power vs. Force, which has been translated into 25 languages and sold over a million copies. Success Is for You uses many of the concepts that fans of Dr Hawkins will recognize and applies them to the world of business and the psychology of success. Expanding upon the illuminating discussion of the attractor patterns of success from Power vs. Force, this remarkable never-before-published book pulls back the curtain on the inner workings of the successful mind. For, according to Dr Hawkins, success is an attitude we inhabit, rather than a goal we strive for. New readers will find this to be a perfect introduction to an incredible teacher and foremost expert on mental processes, providing profound insights and real-world examples to help anyone focus on - and consequently achieve - what they desire. This fascinating book reveals: The causality formula for success (and deconstruction of so-called failure) How goodwill can actually turn to profit Nine acid-test steps to determine our mode of being How to 'get to the top' (and why the destination is really our starting point) Yet its scope ranges far beyond a mere how-to manual. As Dr Hawkins says, 'Having facts and know-how... does not guarantee success. There are other factors involved. It is these other secret factors that we are going to explore'. The secret factors - the heart-centred power principles underlying success - are decoded here... delivering an eternal message of possibility for us all.
Visa hela texten

Dr David R. Hawkins was Director of The Institute for Spiritual Research, Inc., and Founder of the Path of Devotional Nonduality. He was renowned as a pioneering researcher in the field of consciousness, as well as author, lecturer, clinician, physician and scientist. He served as an advisor to Catholic, Protestant and Buddhist monasteries, appeared on major network television and radio programmes, and lectured widely at such places as Westminster Abbey, the Oxford Forum, the University of Notre Dame and Harvard University. People from all walks of life and nationalities honour Dr Hawkins as a teacher of advanced awareness, exemplified in the title 'Foremost Teacher of the Way to Enlightenment'. His life was devoted to the upliftment of mankind until his death in 2012.