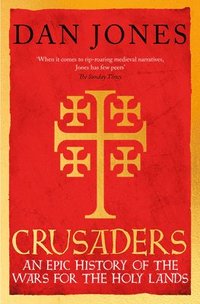 An Epic History of the Wars for the Holy Lands

av Dan Jones
Inbunden Engelska, 2019-09-05
279
Köp
Spara som favorit
Skickas inom 5-8 vardagar.
Gratis frakt inom Sverige över 159 kr för privatpersoner.
Finns även som
Visa alla 2 format & utgåvor
From the bestselling author of The Templars. 'Voyages, battles, sieges and slaughter: Dan Jones's tumultuous and thrilling history of the crusades is one of the best' SUNDAY TIMES. 'A powerful story brilliantly told. Dan Jones writes with pace, wit and insight' HELEN CASTOR. 'A fresh and vibrant account of a conflict that raged across medieval centuries' JONATHAN PHILLIPS. Dan Jones, best-selling chronicler of the Middle Ages, turns his attention to the history of the Crusades - the sequence of religious wars fought between the late eleventh century and late medieval periods, in which armies from European Christian states attempted to wrest the Holy Land from Islamic rule, and which have left an enduring imprint on relations between the Muslim world and the West. From the preaching of the First Crusade by Pope Urban II in 1095 to the loss of the last crusader outpost in the Levant in 1302-03, and from the taking of Jerusalem from the Fatimids in 1099 to the fall of Acre to the Mamluks in 1291, Crusaders tells a tale soaked in Islamic, Christian and Jewish blood, peopled by extraordinary characters, and characterised by both low ambition and high principle. Dan Jones is a master of popular narrative history, with the priceless ability to write page-turning narrative history underpinned by authoritative scholarship. Never before has the era of the Crusades been depicted in such bright and striking colours, or their story told with such gusto. PRAISE FOR THE TEMPLARS: 'A fresh, muscular and compelling history of the ultimate military-religious crusading order, combining sensible scholarship with narrative swagger' SIMON SEBAG MONTEFIORE. 'Dan Jones has created a gripping page-turner out of the dramatic history of the Templars' PHILIPPA GREGORY. 'The story of the Templars, the ultimate holy warriors, is an extraordinary saga of fanaticism, bravery, treachery and betrayal, and in Dan Jones they have a worthy chronicler. The Templars is a wonderful book!' BERNARD CORNWELL. 'Told with all Jones's usual verve and panache, this is a dramatic and gripping tale of courage and stupidity, faith and betrayal' MAIL ON SUNDAY. 'This is another triumphant tale from a historian who writes as addictively as any page-turning novelist' OBSERVER. 'The Templars is exhilarating, epic, sword-swinging history' TLS. 'Jones carries the Templars through the crusades with clarity and verve. This is unabashed narrative history, fast-paced and full of incident ... Jones tells their story extremely well' SUNDAY TIMES.
Visa hela texten

'Voyages, battles, sieges and slaughter: Dan Jones's tumultuous and thrilling history of the crusades is one of the best ... Jones is exceptionally good at giving evocative snapshots of medieval life, sometimes poignant, sometimes pure Monty Python' * Sunday Times * 'This is rollercoaster history ... Dan Jones has a nose for the dramatic, disgusting and bizarre ... Every page of his extraordinary book provides vivid evidence of the Crusades' continuing ability to mesmerise' * The Times * 'A powerful story brilliantly told. Dan Jones writes with pace, wit and insight' -- Helen Castor 'A fresh and vibrant account of a conflict that raged across medieval centuries' -- Jonathan Phillips 'Compelling ... Jones is adept at teasing out the array of motivations that propelled the crusaders on an arduous, often harrowing, journey to an uncertain, violent destination ... An avowedly pluralist account in which equal weight is given to the experiences of Christians and Muslims ... Jones has written an epic of his own here, as complex as it is compelling' * Prospect * 'Dan Jones has the priceless ability to write page-turning narrative history underpinned by authoritative scholarship. Never before has the era of the Crusades been depicted in such bright and striking colours, or their story told with such gusto' * Edinburgh Reporter * 'The master of the Middle Ages turns his attention to the compelling saga of religious conflict' * Radio Times * 'Crusaders excels not only in narrating this complex history in such a readable and immersive manner, but also in setting events in their wider contexts ... Narratives of medieval knights in combat and conquest can run the risk of romanticising their actions through efforts to spark further interest from the reader, but Jones's treatement of the source material is measured under the engaging prose. Jones has drawn together a compelling work that is weighty in pages but always highly readable' * All About History * 'Dan Jones writes every history book as through it were a Netflix drama' * Yorkshire Post. * 'His tale is steeped in scholarly research and lively writing. Were it not for the violence inherent to his subject matter, you might call it divine' * Christian Science Monitor. * 'A distinct new perspective ... A fantastic, scholarly book ... Masterfully told and makes for a gripping read. A must for anyone with an interest in the period' * Pennant * '[Jones] offers a 'tableau history' - a series of stories with wonderfully bizarre characters on both sides. It's impossible to be cynical about Jones the historian; he's enormously prolific, yet each book is impressively researched and beautifully written. He's a passionate writer, a rumbustious knight who loves his own literary crusade' * The Times * 'Bloody battles and epic sieges abound in this energetic history of the Crusades, a series of adventures that still has ramifications today' * Mail on Sunday * 'Typically breezy and well-paced ... Jones sets out to entertain as well as inform, covering a great deal of ground' * Financial Times * 'The Crusades is a challenging era for the novice but it is brought thrillingly to life in this imaginative history from the broadcaster and best-selling author ... Jones concludes with a timely reminder of the effect the period still has on our world' * Choice Magazine * 'Voyages, battles, sieges and slaughter: a dramatic history of the wars for the Holy Lands that brings the Crusades to fresh and compelling life' * Sunday Times * 'A balanced view ... Jones sticks to a strict academic approach. He mixes recitations of key events and personages with storytelling' * Catholic Universe * 'Skilfully balancing information and entertainment' * The Week * 'Jones has assembled a panoramic, detailed and readable account of a vast sweep of history that must have taken a staggering amount of work' * BookBrunch *

Dan Jones is a broadcaster, award-winning journalist and pioneer of the resurgence of interest in medieval history. He is the bestselling author of Summer of Blood, The Plantagenets, Magna Carta, Realm Divided and The Templars. He lives in London.