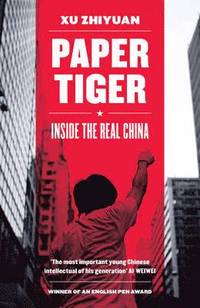 Inside the Real China

av Xu Zhiyuan
Häftad Engelska, 2015-09-24
188
Bevaka
Spara som favorit
Tillfälligt slut – klicka "Bevaka" för att få ett mejl så fort boken går att köpa igen.
Finns även som
Visa alla 3 format & utgåvor
In PAPER TIGER the Chinese journalist and intellectual Xu Zhiyuan paints a portrait of the world's second-largest economy via a thoughtful and wide-ranging series of mini essays on contemporary Chinese society.Xu Zhiyuan describes the many stages upon which China's great transformation is taking place, from Beijing's Silicon district to a cruise down the Three Gorges; he profiles China's dissidents, including Liu Xiaobo, Ai Weiwei and Chen Guangcheng; and explores lesser-known stories of scandals that rocked China but which most people outside that country did not hear about - and which shed troubling light on China's dark heart.Xu Zhiyuan understands his homeland in a way no foreign correspondent ever could. PAPER TIGER is a unique insider's view of China that is measured and brave, ambitious in scope and deeply personal.
Visa hela texten

'A young journalist of considerable acumen and courage, Xu writes of the discontents and dreams of the everyday China' TLS. 'This is a book that will most definitely be contending for 2016's best title ... With remarkable clarity, Xu serves an almost sublime invective, with a grace and composure that almost contradicts the strength of the criticism and quiet outrage that he enacts' Bleg.jigokuki.org. 'Identifies the consequences of an authoritarian state struggling to control a society developing at a breakneck speed ... Xu sounds a warning about the new leader who, he says, believes that "China will become a great power only once all of its citizens believe the same thing"' Daily Telegraph. 'Compelling and important ... it is a powerful account' Sunday Telegraph. '[Xu] does everyone interested in China a valuable service. Great political and moral questions loom, and it is not just "hostile foreign forces" asking them. As Xu notes: "History always exceeds our expectations." I suspect that in Paper Tiger he has published a more optimistic volume than he realizes' Financial Times.

Xu was born in Beijing in l976. He was a visiting scholar at Cambridge University from 2009 to 2010. He is editor-in-chief of the Chinese edition of Business Weekly and writes columns for the FT.