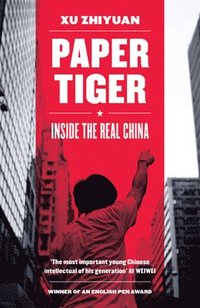 Inside the Real China

av Xu Zhiyuan
Häftad Engelska, 2017-03-09
119
Köp
Spara som favorit
Skickas inom 7-10 vardagar.
Gratis frakt inom Sverige över 159 kr för privatpersoner.
Finns även som
Visa alla 3 format & utgåvor
In PAPER TIGER the Chinese journalist and intellectual Xu Zhiyuan paints a portrait of the world's second-largest economy via a thoughtful and wide-ranging series of mini essays on contemporary Chinese society. Xu Zhiyuan describes the many stages upon which China's great transformation is taking place, from Beijing's Silicon district to a cruise down the Three Gorges; he profiles China's dissidents, including Liu Xiaobo, Ai Weiwei and Chen Guangcheng; and explores lesser-known stories of scandals that rocked China but which most people outside that country did not hear about - and which shed troubling light on China's dark heart. Xu Zhiyuan understands his homeland in a way no foreign correspondent ever could. PAPER TIGER is a unique insider's view of China that is measured and brave, ambitious in scope and deeply personal.
Visa hela texten

'[Xu] does everyone interested in China a valuable service. Great political and moral questions loom, and it is not just "hostile foreign forces" asking them. As Xu notes: "History always exceeds our expectations." I suspect that in Paper Tiger he has published a more optimistic volume than he realizes' * Financial Times * 'Compelling and important ... it is a powerful account' * Sunday Telegraph * 'Identifies the consequences of an authoritarian state struggling to control a society developing at a breakneck speed ... Xu sounds a warning about the new leader who, he says, believes that "China will become a great power only once all of its citizens believe the same thing"' * Daily Telegraph * 'This is a book that will most definitely be contending for 2016's best title ... With remarkable clarity, Xu serves an almost sublime invective, with a grace and composure that almost contradicts the strength of the criticism and quiet outrage that he enacts' * Bleg.jigokuki.org * 'A young journalist of considerable acumen and courage, Xu writes of the discontents and dreams of the everyday China' * TLS *

Xu was born in Beijing in l976. He was a visiting scholar at Cambridge University from 2009 to 2010. He is editor-in-chief of the Chinese edition of Business Weekly and writes columns for the FT.