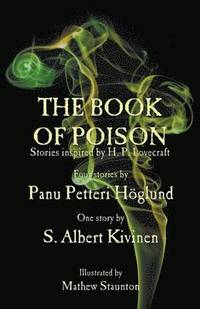 The Book of Poison

"Cuitili": Did the Great Old Ones ever walk in Ireland? Did they have something to do with what happened at Devil's Cliff? The forgotten pages of Amhlaoibh Silleabhin's Diary may hold the answers. ---
"The Call of the Stars": His father left him a packet of mysterious Irish manuscripts, and when Mirtin Mac Cuarta read them, he felt the stars call to him. ---
"The Book of Poison": Finnish student Panu Hglund only wanted to read old books to learn the Irish language, but then one was sent to him that had an ancient poison in it. ---
"The Midnight Worm in Ikaalinen" is at the heart of this collection: a prize-winning story by the Finnish philosopher S. Albert Kivinen, who introduced Lovecraft to Finnish readers of fantasy. In this story, Kivinen describes a cosmic monster who made its nest in Ikaalinen, a small market town in Western Finland-the hometown of the writer himself. ---
"Paappana, or Erkki Santanen's Music": Club music drew hundreds of young people to the decaying suburb. But what black destiny was waiting for them in the cellar below?
Visa hela texten

Bloggat om The Book of Poison