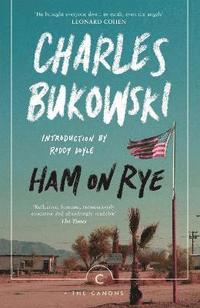 av Charles Bukowski
(2 röster)  |  Läs 1 recension
Häftad Engelska, 2015-06-02
139
Köp
Spara som favorit
Skickas inom 3-6 vardagar.
Fri frakt inom Sverige över 159 kr för privatpersoner.
Finns även som
Visa alla 2 format & utgåvor
INTRODUCTION BY RODDY DOYLE 'He brought everyone down to earth, even the angels' LEONARD COHEN Charles Bukowski is one of the greatest authors of the twentieth century. The autobiographical Ham on Rye is widely considered his finest novel. A classic of American literature, it offers powerful insight into his youth through the prism of his alter-ego Henry Chinaski, who grew up to be the legendary Hank Chinaski of Post Office and Factotum.
Visa hela texten

He brought everyone down to earth, even the angels -- LEONARD COHEN In an age of conformity, Bukowski wrote about the people nobody wanted to be: the ugly, the selfish, the lonely, the mad * * Observer * * Sometimes funny and always sad, Ham on Rye is written in an admirably hard, bare, vivid style * * Times Literary Supplement * * Both powerful and, where appropriate, extremely funny * * Sunday Telegraph * * Reflective, humane, tremendously evocative and absorbingly readable * * The Times * * A scorching account of a childhood, adolescence, a life of ugliness, pain, escape, alcohol, loneliness. Often it is's funny - often it's disturbing - Ham on Rye is a powerful book -- RODDY DOYLE A Laureate of American low life * * Time * * This great novel is Bukowski's supremely honest account of a twisted childhood -- Howard Sounes * * author of Bukowski: Locked in the Arms of a Crazy Life * * The Thing about Bukowski is, when you read what he has to say, he's right -- SEAN PENN Raunchy yet lyrical, occasionally hilarious while abysmally sad * * San Francisco Chronicle * * We all knew Bukowski was a tough guy, but who would have guessed that even the grave could not shut him up? -- BILLY COLLINS There is a real poignancy in the people encountered in Bukowski's work * * New York Times Book Review * *

Charles Bukowski is one of America's best-known contemporary writers of poetry and prose, and, many would claim, its most influential and imitated poet. At the forefront of American counter-culture, his Beat Generation writing is widely celebrated. He was born in Germany in 1920 to an American soldier father and a German mother and was brought to the United States at the age of three. He grew up in Los Angeles and lived there for the majority of his life. During his lifetime he published more than forty-five books, including novels such as Factotum and Post Office. He died in 1994 shortly after completing his last novel, Pulp.