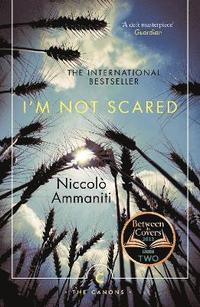 av Niccolo Ammaniti
Häftad Engelska, 2016-06-16
119
Köp
Spara som favorit
Skickas inom 7-10 vardagar.
Fri frakt inom Sverige över 159 kr för privatpersoner.
Finns även som
Visa alla 1 format & utgåvor
One relentlessly hot summer, six children explore the scorched wheat fields that enclose their tiny Italian village. When the gang find a dilapidated farmhouse, nine-year-old Michele Amitrano makes a discovery so momentous that he dare not tell a soul. It is a secret that will force Michele to question everything and everyone around him, and will bring his innocent world toppling down. An unputdownable thriller, I'm Not Scared has become a contemporary classic in Italian literature, read and celebrated the world over.
Visa hela texten

An exquisite parable * * Daily Telegraph * * A deft masterpiece with never a false note * * Guardian * * Ammaniti's prose is faultless from the first * * Independent on Sunday * * The new Italian word for talent is Ammaniti * * The Times * * Beneath this simplicity, Ammaniti weaves in the fairytale metaphors we know so well, giving the novel a haunting profundity * * Sunday Herald * *

Niccolo Ammaniti was born in Rome in 1966. He is the author of many novels translated into English and two short story collections. Several of his novels have been adapted for film, including Steal You Away, which was longlisted for the Independent Foreign Fiction Prize, The Crossroads, winner of the Premio Strega Prize 2007, and the international bestseller I'm Not Scared, which won the prestigious Italian Viareggio-Repaci Prize for Fiction and has been translated into thirty-five languages. Translated from the Italian by Jonathan Hunt. Hunt divides his time between Italy and Britain. His translations include Niccolo Ammaniti's The Crossroads and Steal You Away, Nicolai Lilin's Siberian Education, Luca Rastello's I Am the Market, and Giorgio Vasta's Time on My Hands.