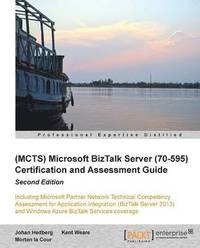 av Johan Hedberg, Morten La Cour, Kent Weare
Häftad Engelska, 2014-03-10
659
Köp
Spara som favorit
A hands-on certification guide with practical examples and sample questions and answers to help BizTalk developers pass the Microsoft BizTalk Server 2010 (70-595) exam. If you are an intermediate level BizTalk developer who wants to pass the Microsoft BizTalk Server 2010 (70-595) exam, then this book is for you. A working knowledge of fundamental BizTalk concepts around the core messaging engine and building business processes using orchestrations is assumed but not required. In addition, core knowledge of Windows Communication Foundation (WCF) and a basic understanding of Electronic Data Interchange (EDI) is recommended.
Visa hela texten

Johan Hedberg is based in Stockholm, Sweden, where he does consultancy, solution architecture, training, mentoring, speaking, and authoring. Johan has 15 years of experience architecting and developing enterprisegrade solutions based on Microsoft technologies. He works closely with Microsoft as a Virtual Technology Solution Professional (VTSP) and with the community as a Microsoft Most Valuable Professional (MVP), and is one of the founders of the BizTalk User Group Sweden. He blogs irregularly at http://blogical.se/blogs/johan and can be found as @JoHed on Twitter. Morten la Cour has worked with the MS BizTalk Server platform for nine years. Besides designing and developing Integration solution for customers, he has also worked on deployment and maintenance of BizTalk applications and BizTalk Server environments. Starting in 2011, he is also working with Windows Azure, Azure Service Bus, and the new Windows Azure BizTalk Services. He has taught several BizTalk Server courses in development, deployment, and management. Besides working with MS BizTalk Server, Morten has 15 years of experience on the Microsoft development platform, including the .NET Framework and SQL Server. Other experiences include XML, XSLT, XPATH, and Oracle databases. Kent Weare was born in Regina, Saskatchewan, Canada. He developed a love for ice hockey, football, and technology. He attended the University of Regina, where he obtained a Degree in Computer Science. After completing his undergraduate degree, he spent time in India completing a Post Graduate diploma in Object Oriented Technology. Recently, Kent has decided to pursue a Master's Degree in Information Management from Arizona State University. He currently lives in Calgary, Alberta, Canada but remains a diehard Saskatchewan Roughrider football fan. Kent began his career at a small Internet startup before taking on a junior role with the Saskatchewan Government. Since then, he has worked on projects for the Canadian Federal Government, a multinational bank in the United States, health care projects in Eastern and Western Canada, and has spent the last eight years employed in the Energy/Utilities sector in Calgary. Kent's current role as a senior enterprise architect involves setting the technical direction for the organization and is very involved in crossdomain disciplines such as Integration and Mobility. During Kent's time at the Federal Government, he had an opportunity to participate in his first BizTalk project. Ten years later, he is still 'hooked' on BizTalk, having worked with every BizTalk version released since then. In 2008, Kent was awarded his first Microsoft MVP award for BizTalk Server. He continues to be active in the BizTalk community and recently, received his sixth consecutive MVP award. Kent maintains active blogs at http://kentweare.blogspot.com and http://www.MiddlewareInTheCloud.com. He may also be seen presenting BizTalkrelated material at local and international user groups. Recently, Kent has coauthored two BizTalk books: Microsoft BizTalk 2010: Line of Business Systems Integration and (MCTS) and BizTalk Server 2010 (70595) Certification Guide.