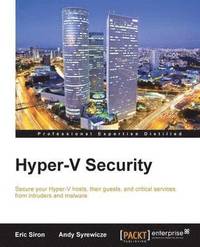 Eric Siron has over 15 years of professional experience in the information technology field. He has architected solutions across the spectrum, from two-user home offices to thousand-user enterprises. He began working with Microsoft Hyper-V Server in 2010, and has focused on Microsoft Virtualization technologies ever since. He is currently employed as a senior system administrator at The University of Iowa Hospitals and Clinics in Iowa City, Iowa. He is a regular contributor to the Hyper-V Portal blog hosted by Altaro Software. In addition to this book, he is the author of Microsoft Hyper-V Cluster Design, Packt Publishing, and the creator of the screencast series, Building and Managing a Virtual Environment with Hyper-V Server 2012 R2, Packt Publishing. Andy Syrewicze has spent the last 11 years and more in providing technology solutions across several industry verticals, including education, healthcare, and professional services, and Fortune 500 manufacturing companies. His skills include VMware, Linux, and Network Security, but his focus over the last 7 years has been on Virtualization, Cloud Services, and the Microsoft Server Stack, with a focus on Hyper-V. That said, he has become quite involved in the Microsoft IT community over the last 2 years via a number of different mediums, such as various blogs, IT boot camps, and podcasts. He has also been named an MVP by Microsoft specifically for his contributions to the Hyper-V community. He has been featured as a co-host of the Technet Radio shows Hyper-V from a VMware Admin's Perspective and Building your Hybrid Cloud, which have been syndicated on Microsoft's channel9.msdn.com website. His other notable skills are professional blogging and public speaking, both of which he participates in on a regular basis. He has a passion for technology, and greatly enjoys sharing his knowledge with peers, customers, and the IT community at large.