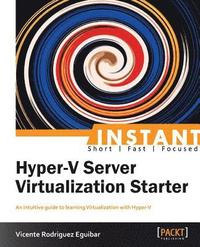 av Vicente Rodriguez Eguibar
Häftad Engelska, 2013-02-22
299
Köp
Spara som favorit
Finns även som
Visa alla 1 format & utgåvor
Get to grips with a new technology, understand what it is and what it can do for you, and then get to work with the most important features and tasks. The approach would be in a tutorial manner that will guide the users in an orderly manner toward virtualization. This book is conceived for system administrator and advanced PC enthusiasts who want to venture into the virtualization world. Although this book goes from scratch up, knowledge on server Operative Systems, LAN and networking has to be in place. Having a good background on server administration is desirable, including networking services.
Visa hela texten

Vicente Rodriguez Eguibar is the founder of Eguibar Information Technology S.L. Company, which is dedicated to providing IT consultancy and services, focusing on corporate directories, networking, virtualization, migration, and IT optimization. He has been a director of this company for the last four years, providing services and solutions to Fortune 500 international companies. He has traveled to several countries in Asia, Europe, and America supervising and managing projects for different companies. His technical background started in 1993 as an IT trainer. He has also worked in many different positions as a system operator, technical project manager, and senior consultant for many international companies. Back in Mexico, where he was born, he was certified by Microsoft as a Product Specialist, being one of the first people to obtain this certification in Mexico. At the beginning in Mexico, he administered and managed computer systems for several industrial companies in the automotive sector. Following his performance in Mexico, he was required by the CIO office to design and manage the international communication network and corporate directory for their company. After managing this position for three years, he was hired by a German car manufacturing company to design the global corporate directory, being in this position for three years. When the German car manufacturing company sold the IT section to a German telecommunications company, Rodriguez Eguibar was appointed to design IT Architecture Infrastructures for external customer companies and government agencies. His last position before creating his own company was for an international call center corporation, where he was in charge of designing, deploying, and migrating to the corporate directory, messaging system, and virtualization strategy. He was married in Mexico to Adriana Sainz 14 years ago; since 2001, he lives in Spain.