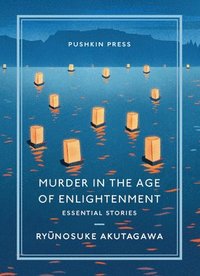 Murder in the Age of Enlightenment

One never tires of reading and re-reading his work. Akutagawa was a born short-story writer. - Haruki Murakami The quintessential writer of his era. - David Pearce Extravagance and horror and in his work but never in his style, which is always crystal-clear. - Jorge Luis Borges He was both traditional and experimental and always compelling and fearless... There is no writer quite like him. - Howard Norman

RYUNOSUKE AKUTAGAWA was one of Japan's leading literary figures in the Taisho period. Regarded as the father of the Japanese short story, he produced over 150 in his short lifetime. Haunted by the fear that he would inherit his mother's madness, Akutagawa suffered from worsening mental health problems towards the end of his life and committed suicide aged 35 by taking an overdose of barbiturates.