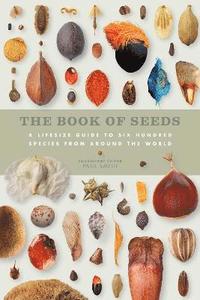 The Book of Seeds

A lifesize guide to six hundred species from around the world

av Dr Paul Smith
Inbunden Engelska, 2018-01-24
339
Köp
Spara som favorit
Skickas inom 3-6 vardagar.
Fri frakt inom Sverige för privatpersoner.
"These seeds will captivate you whether you're a gardener or not." - The Washington Post "A sumptuous guide to 600 of the world's weirdest and most beautiful species, from the black seed with hair like Donald Trump to pinhead-sized orchid seeds." - The Guardian "The book drives home the incredible botanical wealth that is found on our precious blue planet." - The English Garden True time capsules of life, seeds are significant items of hope and promise. They are the most complex organs plants ever produce, and come in an enormously diverse range of shapes, sizes, and colours; from the impressive coco de mer nut to the microscopic seeds of an orchid, to the extraordinary cobalt blue of the traveller's palm pit. Seeds are often overshadowed by the adult plant's size and show. Here, 600 seeds are spotlit, each given equal attention, each shown as glorious photographs, life size and in detail, alongside an engraving of the parent plant. Every profile includes a population distribution map, a table of essential information, and a commentary revealing notable characteristics, related species, and a diagnosis of the specimen's importance in terms of taxonomy, rarity, dispersal method, and scientific significance. Arranged taxonomically, this essential reference reveals the variety and importance of seeds to an extent never seen before.
Visa hela texten

"Whoever dreamed up this idea is a genius. The Book of Seeds is a thing of great beauty that will appeal to cooks and gardeners alike. This stunningly illustrated book features a seed from around the world on every page, enlarged so that you can view each in extraordinary detail and with a life-size version alongside." * The Daily Mail * "At last, conclusive evidence that the best things in life are wrapped up in small packages! This essential reference reveals the variety and importance of seeds to an extent never seen before." * Period Ideas * "A compelling account of one of the fundamentals of the ecology of our planet. Although written by experts, the writing is clear and accessible to the general reader." * Gardens Illustrated * "Weird and wonderful. This is the bible of seeds." * Country & Town House * "A thorough and detailed book that gives a better understanding of the miracle of seeds." * The Chatty Gardener * "'The Book of Seeds is a stunning compendium of one of nature's finest creations" * The Big Issue * "The book drives home the incredible botanical wealth that is found on our precious blue planet." * The English Garden * "A sumptuous guide to 600 of the world's weirdest and most beautiful species, from the black seed with hair like Donald Trump to pinhead-sized orchid seeds." * The Guardian *

Bloggat om The Book of Seeds

Dr Paul Smith is the Secretary General of Botanic Gardens Conservation International, a not-for-profit organization that promotes plant conservation in botanic gardens. He is the former Head of the Royal Botanic Garden, Kew's Millennium Seed Bank (MSB)-the largest and most diverse seed bank in the world. During the last five years, Paul and his team have promoted the concept of seed banks as a resource for human innovation, adaptation, and resilience, and today seeds from the MSB and its partner seed banks are being used in agriculture, horticulture, forestry, and habitat restoration. Paul trained as a plant ecologist and is a specialist in the plants and vegetation of southern Africa. He is the author of two field guides to the flora of south-central Africa and the Atlas of the Vegetation of Madagascar (Kew). He is a Fellow of the Linnean Society and the Royal Geographical Society.