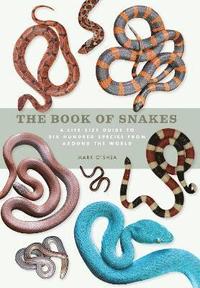 The Book of Snakes

av Mark O'Shea
Inbunden Engelska, 2018-10-11
469
Köp
Spara som favorit
There are over 3,700 species of snake found on every continent except for Antarctica, ranging in size from Barbados' tiny threadsnake to Southeast Asia's massive reticulated python. More than any other creature snakes are surrounded by dark, compelling myths and legend, unsurprising since many constrict their prey to death, or kill with a venomous bite, using a diverse armory of venoms that affect the blood, tissues, organs, and respiration. However, it is especially true of snakes that the closer you observe them, the more exquisite they are in their intricate geometry of pattern, the fine texture of the overlapping scales, and the intricacies of their multifarious lifestyles. The Book of Snakes profiles 600 significant species from all 32 families-one in six of all known species-to create a beautiful collector's piece that is both a significant resource for enthusiasts and scholars, and the most visually stimulating guide on the market.
Visa hela texten

Mark O'Shea is an herpetologist, television broadcaster, zoologist, author, photographer, lecturer and public speaker, and was the Consultant Curator of Reptiles at West Midland Safari Park in the UK for over 30 years. His life has revolved around snakes for more than five decades and is an advocate for snake conservation. Between 1999 and 2003 Mark presented four seasons of the internationally acclaimed O'Shea's Big Adventure for Animal Planet, co-produced with the UK's Channel 4 as O'Shea's Dangerous Reptiles. He has now presented over forty documentaries including films for Discovery Channel, ITV, and the BBC. Mark has conducted herpetological fieldwork, or made films, on every continent except Antarctica. Mark has written numerous books on reptiles, including A Guide to the Snakes of Papua New Guinea, Venomous Snakes of the World (Princeton, 2011), The Book of Snakes (Ivy Press, 2017), and The Handbook to Reptiles and Amphibians (Dorling Kindersley, 2001).