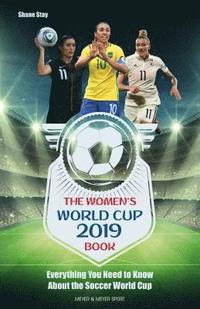 Everything You Need to Know about the Soccer World Cup

av Shane Stay
Häftad Engelska, 2019-05-17
199
Köp
Spara som favorit
For those wondering which teams will be participating in the 2019 Women's World Cup, which are the up-and-coming players to watch out for, what the coaches' strategies will be, or what the games in France will look like, look no further. THE Women's World Cup 2019 Book is a fun, informative guide to the soccer World Cup in France. This book provides all the information anyone would want to know about the World Cup, including in-depth detail about all the teams--the players, coaches, their histories, and strategies--background information on each French stadium that will host a game, and even information on past World Cups. Not only will readers find information on the current teams and playing conditions, but they will also gain a bit of insight into the history of the women's World Cup. Through detailed descriptions and fun anecdotes, author Shane Stay will make soccer fans feel as though they are there at the Cup. Experience the World Cup with THE Women's World Cup 2019 Book and know all there is to know about the 2019 soccer World Cup!
Visa hela texten

Shane Stay is a bestselling author whose books include The European Soccer Leagues 2019-20, Major League Soccer 2019, THE World Cup 2018 Book, Why American Soccer Isn't There Yet, and The Cairo Project. Prior to this publication, in 2008, he played professional soccer, co-authored a book, contributed to a magazine, bottled Leaf Dressing, worked clubs as a comedian, was a restaurateur, and received a master of arts. In 1999, he founded the first online Current Events Game, CE Game. He has appeared on TV and has featured on numerous radio broadcasts, including ESPN and NPR. He lives in Chicago.