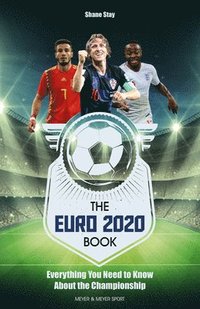 Everything You Need to Know about the Championship

av Shane Stay
Häftad Engelska, 2020-06-28
206
Köp
Spara som favorit
Whether a newcomer or seasoned supporter, this comprehensive guide will give you all the information and insight needed to understand and enjoy the Euro 2020. This book will dive into which players will be appearing in this championship and what to expect from them, as well as the coaches, team strategies, predicted outcomes, and history of previous UEFA Euro tournaments. All these aspects of the tournament will receive an in-depth analysis. Expect star players such as Mbapp , Cristiano Ronaldo, Toni Kroos, Raheem Sterling, Eden Hazard, and Luka Modric to make an appearance. Read about how they have reached one of the most prestigious soccer tournaments. With this book, the reader will stay up to date with every angle of the Euro 2020, and they will know everything there is to know about the championship!
Visa hela texten

Shane Stay is a bestselling author. He has written European Soccer Leagues 2019, THE Women's World Cup 2019 Book, Major League Soccer 2019, THE World Cup 2018 Book, Why American Soccer Isn't There Yet, and The Cairo Project. Shane has played professional soccer and was a restaurateur. He received his Master of Arts from Southern Illinois University. In 1999, he founded the first online Current Events Game, CE Game. He has appeared on TV and has featured on numerous radio broadcasts, including ESPN and NPR. Visit his website, www.shanestay.com.