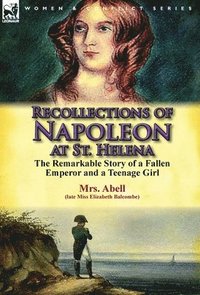 Recollections of Napoleon at St. Helena

The Remarkable Story of a Fallen Emperor and a Teenage Girl

Lucia Elizabeth (Betsy) Balcombe was born in 1802, the second child of William Balcombe, an official of the Honourable East India Company, and his wife Jane, who were living with their family in a cottage called The Briars, on the remote Atlantic Ocean island of St. Helena. Betsy and her older sister were educated in England, but in 1814 they returned to St Helena to rejoin their parents and younger brothers. After Napoleon's abdication in 1814, the allied powers had taken a liberal line on his exile and Napoleon was living like a monarch on the island of Elba, between the Italian coast and his own birthplace Corsica. Escape was inevitable and a small matter for a man of such resourcefulness, determination and ambition. In June of 1815 Napoleon and his army came to ruin on the muddy slopes of Waterloo in Belgium, thus putting to end to his 100 day gamble to wrench the crown from the weak Bourbon monarchy. No one was prepared to risk unleashing Napoleon on the world stage again and St Helena, containing a garrison and constantly circled by watchful warships, was as remote a prison as there was in the early 19th century. Napoleon's residence, Longwood House, was not ready to receive him by the time of his arrival on the island in October of 1815, so he was temporarily housed in a pavilion close to The Briars. So it was that a young French speaking English girl came into contact with the man who had set Europe ablaze. She was initially terrified of him, but gradually friendship blossomed between the teenager and the 47 year old emperor. Eventually she came to call him 'Boney' to his face-something that would have had strong men quaking in their boots-without earning a rebuke. This remarkable story of a totally unlikely relationship will enchant everyone interested in Napoleon as a man rather than as a military leader.

Leonaur editions are newly typeset and are not facsimiles; each title is available in softcover and hardback with dustjacket; our hardbacks are cloth bound and feature gold foil lettering on their spines and fabric head and tail bands.
Visa hela texten