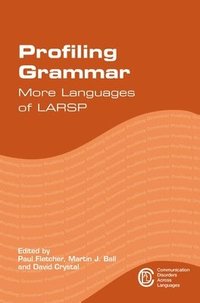 This well-conceived and innovative volume breathes new life into LARSP, extending the number of languages to which it has now been applied to 24, with the promise of more to come. Not only does it thus make LARSP available to many more clinicians around the world, but by providing a common template for linguistic comparison it also gives added impetus to crosslinguistic research into both typical and atypical language use and development. * Mick Perkins, University of Sheffield, UK * This second volume of research on LARSP provides important new information on 12 Asian, European and South African languages. Each chapter offers a concise overview of that language's grammar, a synopsis of research on children's grammatical development and a language-specific profile chart. Along with a chapter providing a fresh look at LARSP stage V in English-speaking children, this unique book will be a valuable resource to clinicians and researchers. * Thomas Klee, University of Hong Kong, Hong Kong *

Paul Fletcher is Emeritus Professor of Speech and Hearing Sciences at University College Cork, Ireland. Since the 1970s he has published widely on language development and language impairment in children speaking English, and more recently on those speaking Cantonese and Mandarin. His research focus, initially primarily on syntax, has broadened to include vocabulary, and the interaction between vocabulary and syntax in language development. He is the author, with Ciara O'Toole, of Language Development and Language Impairment: A Problem-based Introduction (2016). Martin J. Ball is Professor of Speech Language Pathology at Linkoeping University, Sweden. He is co-editor of the journal Clinical Linguistics and Phonetics (Taylor & Francis), and the book series Communication Disorders Across Languages (Multilingual Matters). His main research interests include sociolinguistics, clinical phonetics and phonology, and the Celtic languages. David Crystal is Honorary Professor of Linguistics at the University of Bangor, UK. Since 1984, he has worked from his home in Holyhead, North Wales as a writer, editor, lecturer and broadcaster on linguistics, applied linguistics, and English language studies. His books include The Cambridge Encyclopedia of Language (3rd edn, 2010), The Stories of English (2004) and Making a Point; the Pernickety Story of English Punctuation (2015).