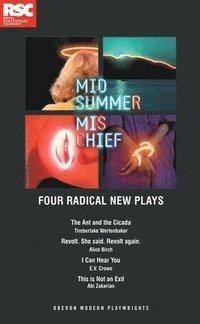 av Alice Birch, Timberlake Wertenbaker, E V Crowe, Abi Zakarian
Häftad Engelska, 2014-06-17
159
Köp
Spara som favorit
Skickas inom 10-15 vardagar.
Fri frakt inom Sverige över 159 kr för privatpersoner.
Finns även som
Visa alla 1 format & utgåvor
A volume of four new plays as part of the RSC's Midsummer Mischief by Alice Birch, E. V. Crowe, Timberlake Wertenbaker and Abi Zakarian. The writers had the famous quote by Laurel Thatcher Ulrich, "Well-behaved women seldom make history" as an initial provocation and each writer has responded to this line in a unique and distinctive way. The Ant and the Cicada by Timberlake Wertenbaker A mysterious investor has set his sights on a prime piece of Greek real estate. Owned by two sisters whose lives and beliefs are at odds, and with debts rising all the time, the property's future is uncertain. In a Greek tragedy, everybody loses. Through the struggle between two very different sisters for control of their family home, Timberlake Wertenbaker's new play explores why we are willing to let the home of art and democracy crumble as the rest of Europe looks on. Revolt. She said. Revolt again. by Alice Birch You are expected to behave - Use the right words Act appropriately Don't break the rules Just behave This play is not well behaved Alice Birch examines the language, behaviour and forces that shape women in the 21st century and asks what's stopping us from doing something truly radical to change them. I can hear you by E.V. Crowe Tommy is dead. It's always tragic when they die young. People have posted loads of nice stuff on his Facebook page. His sister Ruth has returned for the funeral and wants to get it just right. Proper cutlery and a good spread. The send-off he deserved, and certainly better than they managed when mum died. The following Sunday Ruth's plans to leave again are interrupted as the doorbell rings and in walks a still very much dead, Tommy. E.V. Crowe's naturalistic supernatural play examines what the possibilities are for the women in Tommy's family, and questions if it's as easy for everyone to reveal what it is they want. This is not an exit by Abi Zakarian You wake up, tied to a radiator. Your hands are bound and there is a bag over your head. You know you should fight, but you don't know how or against whom. But you can't have it all: where would you put it? Abi Zakarian's new play is a funny and ferocious drama about the absurdity at the heart of modern womanhood, and what really stands in the way of fulfilment.
Visa hela texten

Timberlake Wertenbaker is one of Britain's most celebrated playwrights and is currently the Chair in Playwriting at the University of East Anglia, artistic adviser to the Royal Academy of Dramatic Art and on the council of the Royal Society of Literature. She has written and translated over 40 plays including Our Country's Good, Antigone and Our Ajax. Alice Birch received the Arts Foundation Award for Playwriting in 2014 and was shortlisted for the Bruntwood Prize 2013. Her plays include Open Court - Soap Opera (part of Royal Court's Open Court Season); Little on the Inside (part of Almeida Festival 2013); Life for Beginners and Many Moons. E. V Crowe's most recent play Virgin played at the Watford Palace Theatre. Her other plays include Liar, Liar (Unicorn Theatre), Hero and Kin (Royal Court Theatre), for which E. V Crowe was shortlisted for the Most Promising Playwright at the Evening Standard Theatre Awards. Abi Zakarian is the author of six full-length plays including A Thousand Yards and Swifter, Higher, Stronger; she is one of the playwrights-in-residence for the Schoolwrights scheme in East London.