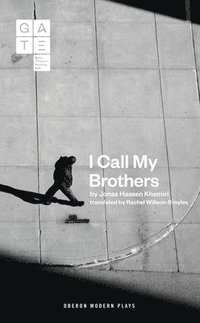 I Call My Brothers

av Jonas Hassen Khemiri
Häftad Engelska, 2015-02-28
169
Köp
Spara som favorit
Skickas inom 10-15 vardagar.
Fri frakt inom Sverige för privatpersoner.
A car has exploded. A city has been crippled by fear. Amor wanders around the city, doing his best to blend in. He's going to exchange a drill head. He's going to call his brothers. He's going to stop stalking Valeria and take care of his long-since-dead grandma. Most important of all: he must not attract any suspicious glances. But what is normal behaviour? Who is a potential perpetrator? And how many times can Shavi call in one day? For 24 intense hours we find ourselves in Amor's head, where the lines between criminal and victim, love and chemistry, and fantasy and reality become more and more blurred.
Visa hela texten

Khemiri puts his finger firmly on the unspeakable: racism and fear of the Other in a post 9/11 world... With [this play], however, he moves his sights from the societies that generate these fears, in Europe and North America, to the objectified individuals internalizing them. * Exeunt Magazine * Intense and visceral, I Call My Brothers is a portrait of the lasting psychological effects of being subjected to and internalizing racism... it is thought-provoking and asks important questions without giving easy answers. By taking a visceral and emotional approach to a timely topic, I Call My Brothers makes an impression that will stay with you for days. * DCtheatrescene.com * Playwright Jonas Hassen Khemiri has penned a profound piece of theatre, almost poetic in its descriptive nature with vivid language that ensnares the attention early on... Continually blindsiding the audience with the upheaval of circumstances, every time the play gets its footing or the audience gets a clear notion of what exactly they're witnessing. Is this a story about a terrorist? Is this a story about a terrorizing experience? Is this a story about injustice and racial profiling? Is this a story about struggle? Or perhaps it is all of the above? Khemiri loads a theatrical powder keg with his script; Michael Dove and the four-person cast ignite it into a theatrical explosion of unapologetic cathartic experiences and narratives that seize the audience and throw them headlong into a chasm of chaos. * Theatrebloom.com *

Bloggat om I Call My Brothers

Jonas Hassen Khemiri is an award-winning Swedish novelist and playwright. He has been named one of the most important Swedish writers of his generation. His first novel, One Eye Red, received the Boras Tidning award for Best Literary Debut. His second novel, Montecore, (published by Knopf in 2011) won several literary awards including the Swedish Radio Award for Best Novel of the Year. Khemiri's work has been translated into more than fifteen languages and his plays have been performed by over forty international companies. In 2011 Invasion! premiered in New York and Khemiri was awarded a Village Voice Obie Award for Playwriting.