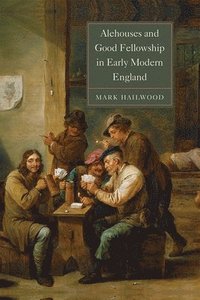 av Mark Hailwood
Häftad Engelska, 2016-10-21
239
Köp
Spara som favorit
Kan levereras innan julafton!
Finns även som
Visa alla 1 format & utgåvor
Representing a history of drinking "from below", this book explores the role of the alehouse in seventeenth-century English society. This book provides a history of the alehouse between the years 1550 and 1700, the period during which it first assumed its long celebrated role as the key site for public recreation in the villages and market towns of England. In the face of considerable animosity from Church and State, the patrons of alehouses, who were drawn from a wide cross section of village society, fought for and won a central place in their communities for an institution that they cherished as a vital facilitator of what they termed "good fellowship". For them, sharing a drink in the alehouse was fundamental to the formation of social bonds, to the expression of their identity, and to the definitionof communities, allegiances and friendships. Bringing together social and cultural history approaches, this book draws on a wide range of source material - from legal records and diary evidence to printed drinking songs - to investigate battles over alehouse licensing and the regulation of drinking; the political views and allegiances that ordinary men and women expressed from the alebench; the meanings and values that drinking rituals and practices held for contemporaries; and the social networks and collective identities expressed through the choice of drinking companions. Focusing on an institution and a social practice at the heart of everyday life in early modern England, this book allows us to see some of the ways in which ordinary men and women responded to historical processes such as religious change and state formation, and just as importantly reveals how they shaped their own communities and collective identities. It will be essential reading for anyone interested in the social, cultural and political worlds of the ordinary men and women of seventeenth-century England. MARK HAILWOOD is Lecturer in History, 1400-1700, at the University of Bristol
Visa hela texten

In earlier times, closely studied here, in broadsides and other literature we hear much about pubs. From diary and other sources this scholar documents the legislation that governed their operation and the fellowship they created . Extensively researched . it contains many useful pieces of information on matters as different as law and daily life... * BIBLIOTHEQUE D'HUMANISME ET RENAISSANCE * Highly-readable and brimming with fascinating and often humorous examples and case-studies, Mark Hailwood's fine work portrays the alehouse as a complex, vibrant and vital institution in the social and cultural life of early modern England. * ARCHIVES * This book is rich in detail and perceptive engagement with the wider historiography of seventeenth-century English social history. It is important reading not only for the history of drinking places but also for the wider character of sociability in early modern England. * H-ALBION * [W]armly recommended both to those interested in the history of drinking and drinking places and in the history of early modern England. * AMERICAN HISTORICAL REVIEW * A timely and well-considered account.. It is an essential addition to the expanding cultural history of drinking and offers future scholars a number of pertinent avenues to explore. * URBAN HISTORY * Makes a very strong case for the alehouse as one of the key institutions in early modern society, and will make a valuable addition for students of popular culture in early modern England. * REVIEWS IN HISTORY * [This] excellent book makes the case for the early modern English alehouse as a vital institution in the lives of the non-urban poor. . . . [A] compelling book. * TIMES LITERARY SUPPLEMENT * The meticulous research and lively writing make this a must-read for anyone interested in the early history of drinking cultures in England. Like the good fellowship it celebrates, it is both complex and fun. It also serves an important purpose in reminding us that the lowly alehouse was 'an ersatz public sphere', as filled with social meaning as any high-class tavern or coffee house; and that the sociability it fostered had a value that deserves preservation. * HISTORY TODAY *