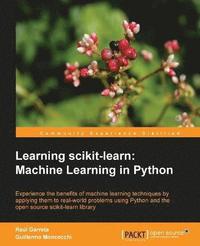 av Ral Garreta, Guillermo Moncecchi
Häftad Engelska, 2013-11-21
339
Köp
Spara som favorit
Skickas inom 10-15 vardagar.
Gratis frakt inom Sverige över 159 kr för privatpersoner.
Machine learning, the art of creating applications that learn from experience and data, has been around for many years. However, in the era of big data, huge amounts of information is being generated. This makes machine learning an unavoidable source of new data-based approximations for problem solving.

With Learning scikit-learn: Machine Learning in Python, you will learn to incorporate machine learning in your applications. The book combines an introduction to some of the main concepts and methods in machine learning with practical, hands-on examples of real-world problems. Ranging from handwritten digit recognition to document classification, examples are solved step by step using Scikit-learn and Python.

The book starts with a brief introduction to the core concepts of machine learning with a simple example. Then, using real-world applications and advanced features, it takes a deep dive into the various machine learning techniques.

You will learn to evaluate your results and apply advanced techniques for preprocessing data. You will also be able to select the best set of features and the best methods for each problem.

With Learning scikit-learn: Machine Learning in Python you will learn how to use the Python programming language and the scikit-learn library to build applications that learn from experience, applying the main concepts and techniques of machine learning.
Visa hela texten

Raul Garreta is a computer engineer with substantial experience in the theory and application of Artificial Intelligence (AI), where he specializes in machine learning and Natural Language Processing (NLP). He is an entrepreneur with a serious interest in the application of science, technology, and innovation to Internet industry and start-ups. He has worked for many software companies ranging from working with video games to implantable medical devices. In 2009, he co-founded Tryolabs with the objective of applying AI to the development of intelligent software products. He is the CTO and product manager of the company. Besides the application of machine learning and NLP, Raul is expert in the Python programming language and has worked for many clients in Silicon Valley. Raul has also worked for the development of the Python community in Uruguay, co-organizing local PyDay and PyCon conferences.He has also been an assistant professor in Computer Science at the Universidad de la Republica, Uruguay since 2007, where he has delivered courses on Machine Learning, NLP, and Automata Theory, and Formal Languages. As well as that, he is finishing his Master's degree in Machine Learning and NLP. He is interested in the research and application of Robotics, Quantum Computing, and Cognitive Modeling. He is a technology enthusiast and science fiction lover (geek), but is also a big fan of arts such as cinema, photography, and painting. Guillermo Moncecchi is a Natural Language Processing researcher at the Universidad de la Republica of Uruguay. He received a PhD in Informatics from the Universidad de la Republica, Uruguay and a Ph.D in Language Sciences from the Universite Paris Ouest, France. He has participated in several international projects on NLP. He has almost 15 years of teaching experience on Automata Theory, Natural Language Processing, and Machine Learning. He also works as Head Developer at the Montevideo Council and has lead the development of several public services for the council, particularly in the Geographical Information Systems area. He is one of the Montevideo Open Data movement leaders, promoting the publication and exploitation of the city's data.