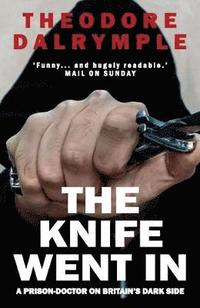 The Knife Went In

A Prison-Doctor on Britain's Dark Side

`The blackest of black humour... the best of humanity.' `Pellucid prose.' Dominic Lawson, Daily Mail; `A razor-sharp expose of our broken society... Both funny and a badly needed corrective to conventional wisdom... hugely readable ... gripping real-life stories... tells a deep truth about the sort of society we have become. A future historian, a century hence, will learn more about 21st Century Britain from this book than from any official document. So will you. Please read it.' Peter Hitchens, Mail on Sunday; `Nobody has observed the... fallacies of modern England with a clearer eye, or a more intelligent quill. It would be nice to know that the BBC had heard of him because we could expect to hear him deliver next year's Reith Lectures.' Sunday Telegraph; `Dalrymple is... [o]ne of the most interesting men of our times... There is nothing in his tale to celebrate, yet in the telling he deserves the commendation of anybody who values human civilization.' The Times

Bloggat om The Knife Went In