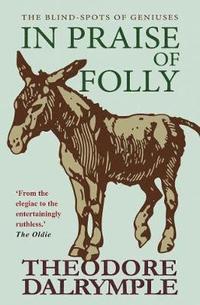 In Praise of Folly

The Blind-spots of Geniuses

'Moves from the elegiac to the entertainingly ruthless in a single paragraph.' The Oldie: 'Characteristic acuity about human nature.' Catholic Herald: 'One of our most celebrated essayists.' Mail on Sunday

Bloggat om In Praise of Folly

Theodore Dalrymple is a psychiatrist who acts as expert-witness in murder trials and has a column in The Oldie magazine. After working as a doctor in Africa and the Gilbert Islands, he returned to Britain and has worked in prisons and hospitals in the East End of London, the Midlands, and Birmingham. He is a contributor to The Times, Telegraph, Wall Street Journal, Spectator, and the British Medical Journal. He is the author of several books, including the acclaimed Spoil Rotten, The Knife Went In, Litter, and the Pleasure of Thinking.