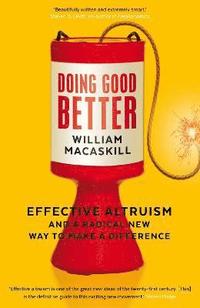 Effective Altruism and a Radical New Way to Make a Difference

av Dr William Macaskill
(1 röst)
Häftad Engelska, 2016-07-07
129
Bevaka
Spara som favorit
Tillfälligt slut – klicka "Bevaka" för att få ett mejl så fort boken går att köpa igen.
Finns även som
Visa alla 1 format & utgåvor
Most of us want to make a difference. We donate to charity, buy Fairtrade coffee, or try to cut down on our carbon emissions. Rarely do we know if we're really helping, and despite our best intentions, our actions can have ineffective -- and sometimes downright harmful -- outcomes. Confronting this problem, William MacAskill developed the concept of effective altruism, a practical, data-driven approach which shows that each of us has the power to do an astonishing amount of good, given the right information. His conclusions are often surprising; by examining the charities we give to, the goods we buy and the careers we pursue, Doing Good Better is a fascinating and original guide which shows how, through simple actions, you can improve thousands of lives -- including your own.
Visa hela texten

William MacAskill is an Associate Professor of Philosophy at the University of Oxford and co-founder of non-profits Giving What We Can and 80,000 Hours, which inspire people to use their time and money as effectively as possible to fight the world's most pressing problems. Between them they have raised over $12 million for the most cost-effective charities plus a further $380 million in lifetime pledges. He and his organisations have been featured in the New York Times, the Wall Street Journal, the Today programme, and on Fox News, NPR and TED.