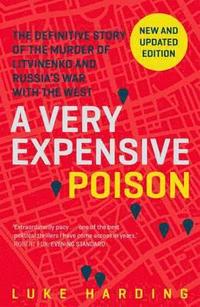 av Luke Harding
Häftad Engelska, 2016-12-15
139
Köp
Spara som favorit
Skickas inom 5-8 vardagar.
Gratis frakt inom Sverige över 159 kr för privatpersoner.
Finns även som
Visa alla 1 format & utgåvor
1st November 2006: Alexander Litvinenko is brazenly poisoned in central London. Twenty-two days later he dies, killed from the inside by Polonium - a rare, lethal and highly radioactive substance. His crime? He had made some powerful enemies in Russia. This is the inside story of the life and death of Litvinenko and of Russia's new cold war with the west. Harding traces the journey of the nuclear poison across London, from hotel room to nightclub, assassin to victim. It's a deadly trail that leads back to Vladimir Putin, and to a regime exposed by the Panama Papers. Luke Harding's investigation into the death of Alexander Litvinenko, A Very Expensive Poison, may also help us shed light on the poisoning of Sergei Skripal and his daughter in Salisbury. From the author of the No.1 New York Times bestseller Collusion.
Visa hela texten

Luke Harding is an award-winning foreign correspondent with the Guardian. Between 2007 and 2011 he was the Guardian's Moscow bureau chief; the Kremlin expelled him from the country in the first case of its kind since the cold war. He is the author of Mafia State and co-author of WikiLeaks: Inside Julian Assange's War on Secrecy, The Liar: The Fall of Jonathan Aitken (nominated for the Orwell Prize) and The Snowden Files. Two of Harding's books have been made into films; The Fifth Estate and Snowden.