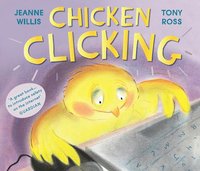 av Jeanne Willis
Häftad Engelska, 2015-02-05
99
Köp
Spara som favorit
Finns även som
Visa alla 2 format & utgåvor
One night Chick hops onto the farmer's house and has a browse on his computer - CLICK - soon she's shopping online for the whole farm! But when she arranges to meet up with a friend she's made online, she discovers all is not as it seems... Little Red Riding Hood for the iPad generation, this is the perfect book for teaching children how to stay safe online.
Visa hela texten

"A great book for parents and teachers to use to introduce safety on the internet (not forgetting the fun story, too)" -- Libby Allman * Guardian * "Highly entertaining... A subtle introduction to responsible internet use, lightened by Willis's wild imagination and Ross's delightful pictures." -- Sally Morris * Daily Mail * "Absolutely perfect... Every primary school in the country should own a copy of this book." -- Melanie McGilloway * Armadillo Magazine * "Award-winning Jeanne Willis and Tony Ross go to the heart of a modern predicament in this cautionary tale" * Julia Eccleshare, Lovereading, Book of the Month * "An ideal book to introduce the idea of responsible use of the Internet to a wide range of ages, both Early Years and Primary. Highly recommended." * Books for Keeps *

Jeanne Willis (Author) Jeanne Willis is an award-winning children's author and scriptwriter. She had her first picture book published by Andersen at the age of 21, and has won the Silver Medal Smarties Prize (Tadpole's Promise), the Nasen Special Needs Award (Susan Laughs), the Sheffield Children's Book Award (Who's in The Loo) and the Red House Children's Book Award (Bottoms Up). Jeanne has also worked on scripts for TV, including Polly Pocket and The Slow Norris, and a pilot TV series for Dr Xargle.Tony Ross (Illustrator) Tony Ross has been illustrating books for over 40 years, and has been published all over the world. He is perhaps best known for his much-loved Little Princess series, which has been adapted for TV and is currently showing on Channel 5s Milkshake, and for his collaboration on David Walliams' best-selling children's books. Tony's books have been shortlisted for the The Laugh Out Loud Book Awards (Slug Needs a Hug) and the Kate Greenaway (Dr Xargle's Book of Earth Tiggers), and Tadpole's Promise won the Silver Medal Smarties Prize. He has been named as the best-selling illustrator in the UK for three years in a row, and he is the UK's libraries' most-borrowed illustrator. He lives in Macclesfield.