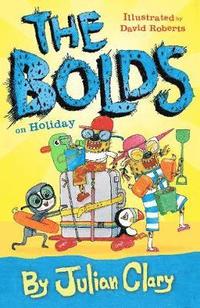 The Bolds on Holiday

av Julian Clary
Inbunden Engelska, 2017-02-02
6-9 år
149
Bevaka
Spara som favorit
Tillfälligt slut – klicka "Bevaka" för att få ett mejl så fort boken går att köpa igen.
Finns även som
Visa alla 2 format & utgåvor
Carry on camping with dream team Julian Clary and David Roberts! It's the summer holidays, and the hairiest family in Teddington decide to take a well-earned holiday by the seaside. With their extended hyena family in tow, they head on down to Cornwall for a spot of camping. But it's never long before trouble sniffs these hyenas out, and Bobby is mistaken for a pup and snatched by a wicked dognapper. The Bolds will need all their ingenuity to hunt her down and rescue all the pilfered pooches. But can these hyenas-in-disguise save the day, without letting the cat out of the bag...?
Visa hela texten

"I wish we lived next door to the Bolds!" -- Davina McCall "Silliness and fun" -- Nicolette Jones * Sunday Times, Children's Book of the Week * "Clary writes at a quick-fire pace, with short, snappy sentences and lots of jokes... But the real charm of his books lies in the way he recasts the hyena as a sympathetic outsider - and makes it a figure of gentle fun." -- Emily Bearn * Daily Telegraph * "Bursting with fun" * Guardian, The Best New Children's Books supplement * "David Roberts's brilliant illustrations make the most of Julian Clary's riotous story" -- Julia Eccleshare * Lovereading4Kids * "With silly jokes, crazy characters and exciting escapades, this book has laughs from the first page to the last." * The Week Junior * "Riotous" -- Fiona Noble * The Bookseller * "Such a funny series" * Down the Rabbit Hole * "A beautifully illustrated, laugh-a-minute romp" * Little London * "A hilarious page-turner" * Reading Force *

Julian Clary (Author) Julian Clary is a comedian, entertainer and novelist, who has toured across the world with his one-man shows. Julian has appeared on numerous popular TV shows including Celebrity Big Brother (which he won) and Strictly Come Dancing. He has starred in West End productions and appears in panto most years. He lives in London with his husband.David Roberts (Illustrator) David Roberts is an award-winning illustrator. After graduating, he worked as a milliner and a fashion illustrator, but always felt his true calling was in children's books. He has collaborated with some of Britain's finest children's authors, including Julia Donaldson, Sally Gardner, Philip Ardagh and Jacqueline Wilson. He is also the creator of the popular Dirty Bertie books. He lives in London with his husband. He has been twice-shortlisted for the Kate Greenaway Medal, and in 2006 he won the Nestle Children's Book Prize Gold Award.