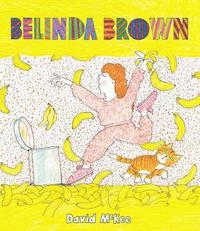 av David McKee
Inbunden Engelska, 2018-07-05
3-6 år
159
Köp
Spara som favorit
Finns även som
Visa alla 2 format & utgåvor
David McKee has created a new modern classic with the story of Belinda, a banana-obsessed young girl. Her whole family thinks it's a phase, except for Grandma Brown: she worries, and worry is hard to keep down. She asks Belinda to give up her favourite fruit before she gets a banana-shaped body, but Belinda has other ideas. 'What a joy; a new rhyming book from the Elmer and Mr Benn creator, David McKee... Fantastic illustrations' THE TIMES
Visa hela texten

"What a joy; a new rhyming book from the Elmer and Mr Benn creator, David McKee... Fantastic illustrations" -- Alex O'Connell * The Times * "This totally daft tale is documented in David McKee's zany inimitable illustrative style and accompanying bouncy rhyming text" * Books for Keeps * "David McKee serves up a visual treat and a masterclass in humour and subtle messages." * The School Librarian * "Everyone loves a bit of silliness ... children will find much to enjoy here." * Early Years Educator * "Rhyming nonsense from McKee to tickle the taste buds and bring on the giggles." * Red Reading Hub *

David McKee is the creator of well-known characters including King Rollo, Mr Benn and Elmer the Patchwork Elephant, which is now published in more than 60 languages and has its own successful global merchandise programme. David was born in Devon and went to Plymouth Art College, where he had a traditional training. On leaving college he drew regularly for Punch, Reader's Digest, and The Times Educational Supplement. His drawings were influenced especially by Saul Steinberg and Andre Francois. In 2020 David won the British Book Awards Illustrator of the Year Award and BookTrust's Lifetime Achievement Award. He lives in the South of France and in London.