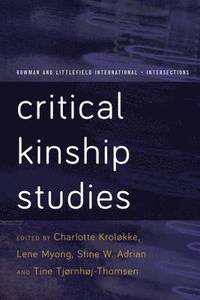 av Charlotte Krolokke, Lene Myong, Stine Willum Adrian, Tine Tjornhoj-Thomsen
Inbunden Engelska, 2015-12-18
1629
Köp
Spara som favorit
Skickas inom 10-15 vardagar.
Fri frakt inom Sverige för privatpersoner.
Finns även som
Visa alla 2 format & utgåvor
In recent decades the concept of kinship has been challenged and reinvigorated by the so-called "repatriation of anthropology" and by the influence of feminist studies, queer studies, adoption studies, and science and technology studies. These interdisciplinary approaches have been further developed by increases in infertility, reproductive travel, and the emergence of critical movements among transnational adoptees, all of which have served to question how kinship is now practiced. Critical Kinship Studies brings together theoretical and disciplinary perspectives and analytically sensitive perspectives aiming to explore the manifold versions of kinship and the ways in which kinship norms are enforced or challenged. The Rowman and Littlefield International - Intersections series presents an overview of the latest research and emerging trends in some of the most dynamic areas of research in the Humanities and Social Sciences today. Critical Kinship Studies should be of particular interest to students and scholars in Anthropology, Sociology, Cultural Studies, Medical Humanities, Politics, Gender and Queer Studies and Globalization.
Visa hela texten

This interdisciplinary and impressive collection of works represents a refreshing contribution to critical kinship studies, and is in all respects up-to-date with our time's diverse ways of creating and sustaining kinship on both a national and transnational level and whether it is about various ART techniques, adoption or surrogacy. -- Tobias Hubinette, Associate Professor in Intercultural Studies at Karlstad University In a series of well-crafted case studies based on empirical research throughout the Eastern hemisphere, this edited collection brilliantly demonstrates that reproductive technologies and adoption are integral to today's political and economic inequality and the biopolitics of migration. The volume leaves us in no doubt of the urgent need for the critical kinship studies for which the editors call. -- Charis Thompson, Chancellor's Professor, UC Berkeley By the mid-1980s, kinship studies in anthropology looked as dated and irrelevant as totemism. But by 2001, they had been reinvented and rejuvenated in such works as Sarah Franklin and Susan McKinnon's edited collection, Relative Values (CH, Nov'02, 40-1635), and Maurice Godelier's The Metamorphoses of Kinship (CH, Sep'12, 50-0366). Classic topics such as patrilineal clans disappeared, and research on migration, immigrant communities, and transnationalism demonstrated the significance of kinship. New research on gender, adoption, reproductive technology, new family forms, and same-sex marriage burgeoned. These innovations are linked to the turn of anthropologists toward research into their own societies. This collection carries innovation further. It emphasizes interdisciplinary research and what the editors call "mobility": transnational movement of people, reproductive substances, and kinship understandings as well as international communication through new media. The contributions show how global economic and political inequalities are linked to mobility. The 18 essays are organized into four sections: kinship as substance, as consumption, as political economy, and reimagined. They are all based on field research around the globe and cover such topics as surrogacy, transnational adoption, transnational egg and sperm donation, creation of fictive kinship, and cultural notions of animals as kin. Summing Up: Highly recommended. All college and university libraries. * CHOICE *

Charlotte Krolokke is Professor in the Department for the Study of Culture at the University of Southern Denmark. Lene Myong is Associate Professor at The Danish School of Education, Aarhus University. Stine Willum Adrian is an Associate Professor at the Department of Learning and Philosophy at Aalborg University. Tine Tjornhoj-Thomsen is a Professor of Anthropology at the Danish National Institute of Public Health (NIPH) in the Faculty of Health Sciences, University of Southern Denmark.