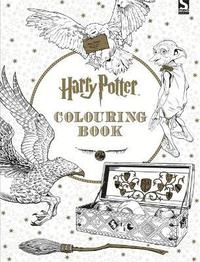 (3 röster)  |  Läs 2 recensioner
Häftad Engelska, 2015-11-05
137
Köp
Spara som favorit
Packed with stunning pieces of artwork from the Warner Bros. archive, this book gives fans the chance to colour in the vivid settings and beloved characters of J.K. Rowling's wizarding world. From the heraldry of the four Hogwarts houses to the extravagant wares of Weasley's Wizard Wheezes, the world of Harry Potter overflows with radiant colour. Filled with intricate illustrations and elaborate designs used in the making of the Harry Potter films, this book invites you to imbue the wizarding world with colour in your own explorations of Hogwarts castle, the Forbidden Forest, and much more. You will also find pages of magical creatures and iconic scenes from the films, from the Sorting Ceremony in Harry's first year, to the unforgettable final battle between Harry and Lord Voldemort, as well as some of the marvellous props used in the movies, such as The Quibbler, Quidditch World Cup posters, and the Triwizard Cup. Unique and interactive, the Harry Potter Colouring Book is a perfect collector's item for fans of the blockbuster saga. For best results, we recommend the use of colouring pencils to colour and create your stunning pictures.
Visa hela texten

A treat for all Harry fans, it has gorgeous line drawings. -- Natasha Harding * The Sun * It's the coolest colouring book ever. I like the pictures of Harry and Hagrid best * Phoebe, age 7 * Harry Potter fans might not be able to employ the charm with which the boy wizard managed to turn his primary school teacher's wig blue, but - wielding their muggle felt-tips - they will soon be able to bring colour to the world created by JK Rowling thanks to a new colouring book. The first official Harry Potter colouring book is out on 5 November, publisher Studio Press, said today, and is already storming the bestseller charts, in ninth place on Amazon.co.uk's bestseller list with almost a month to go before publication. Running to almost 100 pages of artwork drawn from the Harry Potter films, it "includes all of the fan-favourite scenes, creatures, and characters of the series", said the publisher, "from Dobby and baby Norbert to Quidditch games and the unforgettable final battle between Harry and Lord Voldemort". -- Alison Flood * The Guardian * From Warner Bros comes an enchanting book filled with characters, film stills, scenes and detailed drawings used in the making of the Harry Potter movies. There's Dobby the House-elf, Hedwig and baby Norbert, as well as Quidditch games to partake in and, of course, the ultimate battle between Harry and Lord Voldemort. -- American Express Essentials * http://www.amexessentials.com/top-colouring-books-for-adults-2016/ * Colouring away your worries can be as easy as 'Wingardium Leviosa' with this Harry Potter-themed collection of drawings, which features scenes and characters from the popular film series. A must-have for any Potterhead. -- Melisha Kaur * Evening Standard *