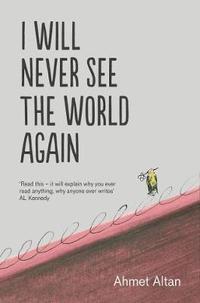 I Will Never See the World Again

av Ahmet Altan
Häftad Engelska, 2019-03-07
129
Köp
Spara som favorit
Skickas inom 5-8 vardagar.
Fri frakt inom Sverige över 159 kr för privatpersoner.
Finns även som
Visa alla 3 format & utgåvor
Longlisted for the 2019 Baillie Gifford Prize for Non-Fiction The destiny I put down in my novel has become mine. I am now under arrest like the hero I created years ago. I await the decision that will determine my future, just as he awaited his. I am unaware of my destiny, which has perhaps already been decided, just as he was unaware of his. I suffer the pathetic torment of profound helplessness, just as he did. Like a cursed oracle, I foresaw my future years ago not knowing that it was my own. Confined in a cell four metres long, imprisoned on absurd, Kafkaesque charges, novelist Ahmet Altan is one of many writers persecuted by Recep Tayyip Erdogan's oppressive regime. In this extraordinary memoir, written from his prison cell, Altan reflects upon his sentence, on a life whittled down to a courtyard covered by bars, and on the hope and solace a writer's mind can provide, even in the darkest places.
Visa hela texten

"[I Will Never See the World Again] speaks for itself with such clarity, certainty and wisdom that only one thing needs to be said: read it. And then read it again...a radiant celebration of the inner resources of human beings...Its account of the creative process is sublime, among the most perfectly expressed analyses of that perpetually elusive phenomenon. And it is a triumph of the spirit." --The Guardian "Both delicate and robust; there is a lyricism to this prose that the reader intuitively feels must somehow transcend language itself...a series of generous, enlightened, and deeply life-affirming meditations on what it means to be human in an inhuman world, Altan's memoir liberates the soul even as it throws its author's captivity into excruciatingly sharp relief." --Irish Times "Eloquent and profoundly affecting...Altan's account of living with courage and dignity in grossly unjust circumstances is a testament to human endurance, joining the ranks of the greatest prison memoirs." --The Herald (Scotland) "I hope that everyone who can read, whatever their politics, reads Ahmet Altan's response to his imprisonment. Repressive regimes hope that if they lock up writers they are also locking up ideas. This will always fail." --Neil Gaiman "From the bowels of Erdogan's prison system emerge these meditations on the vicissitudes of justice, products of a richly stocked mind, engrossing, sometimes profound, and remarkable for their equanimity." --J. M. Coetzee "Remember the name Ahmet Altan! Add him to the great voices writing from prison across the centuries--Boethius, Cervantes, Gramsci, Soyinka, Solzhenitsyn--and be moved to tears and indignation by his story." --Ariel Dorfman "Ahmet Altan's memoir is a message in a bottle, a pearl in a bottle, smuggled out to us from Erdogan's sea of darkness. A startling, heartbreaking testament, I Will Never See the World Again stands with those very rare books--by Frankl, Niemoeller, Grossman, Levi, Solzhenitsyn--which bring truths from a furnace where lives are burned. Read this--it will explain why you ever read anything, why anyone ever writes." --A. L. Kennedy "A deeply moving memoir, which resounds loudly with the sheer pleasure of writing. We owe Ahmet Altan a tremendous debt for the strength he has shown in sharing his story with us." --Jon McGregor

Born in 1950, Ahmet Altan, one of today's most important Turkish writers, was arrested in September 2016 for his work as a journalist. An advocate for Kurdish and Armenian minorities and a central figure in the Turkish cultural world, he is the author of five successful novels. He has been awarded the Grand Prix from the Akademi Publishing House, the prestigious Freedom and Future of the Media Prize from the Media Foundation of Sparkasse Leipzig and the International Hrant Dink Award. In February 2018 he was sentenced to life imprisonment by the Turkish state.