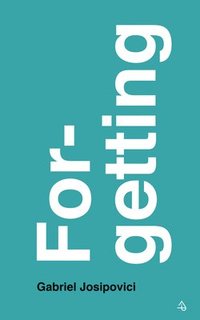 av Gabriel Josipovici
Häftad Engelska, 2020-01-30
139
Köp
Spara som favorit
Finns även som
Visa alla 1 format & utgåvor
We cannot understand the phenomenon of remembering without invoking its opposite, forgetting. Taking his cue from Beckett - 'only he who forgets remembers' - Josipovici uncovers a profound cultural shift from societies that celebrated ritual remembrance at fixed times and places, to our own Western world where the lack of such mechanisms leads to a fear of forgetting, to what Nietzsche diagnosed as an unhealthy sleeplessness that infects every aspect of our culture. Moving from the fear of Alzheimer's to invocations of 'Remember the Holocaust' and 'Remember Kosovo' by unscrupulous demagogues, from the burial rituals of rural societies to the Berlin and Vienna Holocaust Memorials, from eighteenth-century disquiet about the role of tombs and inscriptions to the late poems of Wallace Stevens, Josipovici has produced, in characteristic style, a small book with a very big punch. Gabriel Josipovici's novel The Cemetery in Barnes (2018) was shortlisted for the 2018 Goldsmiths Prize and longlisted for the 2019 Republic of Consciousness Prize.
Visa hela texten

Gabriel Josipovici was born in Nice in 1940 of Russo-Italian, Romano-Levantine parents. He lived in Egypt from 1945 to 1956, when he came to Britain. He is the author of eighteen novels, three volumes of short stories, nine critical works, and numerous stage and radio plays, and is a regular contributor to the Times Literary Supplement. His plays have been performed throughout Britain and on radio in Britain, France and Germany, and his work has been translated into the major European languages and Arabic. In 2016, Carcanet published The Teller and the Tale: Essays on Literature and Culture, 1990-2015.