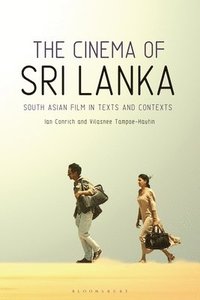 The Cinema of Sri Lanka

av Ian Conrich
Inbunden Engelska, 2016-01-30
909
Bevaka
Spara som favorit
Ännu ej utkommen – klicka "Bevaka" för att få ett mejl så fort boken boken går att köpa.
Film production in Sri Lanka is exceptionally prolific and diverse. Though Sri Lanka is a developing nation that has seen many years of internal conflict, it has produced many more films than most other Commonwealth nations.This is the first English language book to explore the vibrant but overlooked cinema of Sri Lanka. Written by two of the leading experts in the field, it takes a close look at individual films, while also explaining their wider contexts. A range of relevant social, cultural, historical, and political issues are introduced, as key films are analysed in relation to regionalism and globalisation, gender, sexuality and gender, and postcolonialism. The Cinema of Sri Lanka is a fascinating book which fills a major gap in Asian film studies.
Visa hela texten

Ian Conrich is Fellow in the Centre for Film Studies, at the University of Essex, and Professor in Film and Visual Culture at the University of Derby. He is Principal Editor of the Journal of New Zealand and Pacific Studies, an Editor of the Journal of British Cinema and Television, Associate Editor of Film and Philosophy, and an advisory board member of Studies in Australasian Cinema, and Interactive Media.